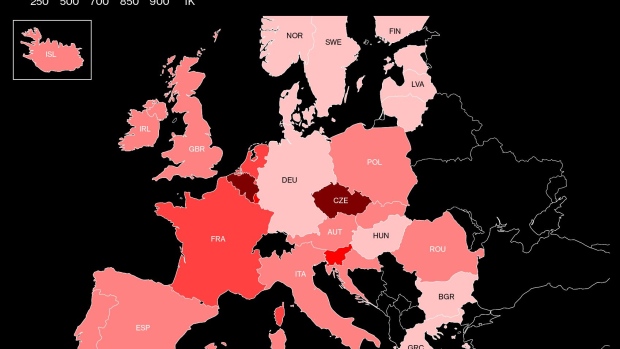 A worker pulls in a table from outside a cafe before closing for curfew in Milan, Italy, on Monday, Oct. 26, 2020. Italy introduced its strongest virus restrictions since the end of a lockdown in May, and Spain will impose new measures, including a nationwide curfew. , Bloomberg

(Bloomberg) -- A virtual summit of European Union leaders has morphed into a crisis meeting after its two biggest economies imposed the kind of harsh restrictions many had sworn not to do. It was a moment of reckoning with a virus that in its second incarnation caught the bloc on the back foot.

On a video conference on Thursday, there will be the inevitable sense that they were wrong to think the worst was behind them and that the pandemic could be contained with targeted measures. Every day brings a record, and member states -- in a panic -- are grasping for answers. They’re unclear that what worked the first time around will work again. Covid-19 isn’t as deadly, yet the cases are spiraling. Partial lockdowns are still a half-way house.

Across the 27-nation EU, where more than 210,000 people have died from the disease and nearly 6.5 million have been infected, the pattern now seems to be restaurant closures and city curfews, but an insistence on keeping schools open. Germany, the bloc’s economic engine, will impose a one-month partial shutdown starting Monday, while France will enter a nationwide lockdown from Friday.

A somber looking Emmanuel Macron told the nation that “the measures we’ve taken have turned out to be insufficient to counter a wave that’s affecting all Europe.” He’ll likely be even more candid with his peers in private at a meeting that has taken on greater urgency just in the past 24 hours.

Italy is also considering regional lockdowns, according to government officials who asked not to be identified because the plans are private. New cases jumped to a record this week and hospitalizations climbed to the highest level since May.

Ireland and Portugal have also imposed measures to curb the spread, but many of the new restrictions are less severe than previous iterations in the spring, and come after case numbers have already surged. The worry is that as people have grown accustomed to the pandemic they may not adhere to the rules as strictly.

The EU says member countries squandered initial successes in the spring, when draconian confinements stopped the spread of the illness. “Measures were relaxed too soon,” European Commission President Ursula von der Leyen told reporters in Brussels on Wednesday. Virologist Peter Piot, who advises her, said at a joint press conference: “If we relax too much, there will be a third wave.”

Even nations that initially managed the pandemic efficiently let down their guard. Greece, which won global applause during the initial outbreak, was home to a series of super-spreader social events including weddings and christenings that were allowed during the summer.

Tracking measures in some countries are overwhelmed. Belgium had to stop testing people with no symptoms of Covid-19 starting Oct. 21 as laboratory capacity got strained and priority groups, such as workers in nursing homes, had to wait for as long as five days to get the results, aggravating a staff shortage.

The big question for the leaders: Can EU countries avoid the general lockdowns that sent the European economy into a tailspin in the first half of the year and prompted an unprecedented European recovery package?

The video conference, due to start at 6:30 p.m. Brussels time, is supposed to help prevent such a bleak scenario by enabling national governments to learn from one another and improve policy coordination. One issue to be discussed is supplementing current testing practices with so-called antigen tests, which are less reliable but yield results within 15 minutes.

Antigen tests “make it faster and easier to identify, on a large scale, individuals who are carriers of the virus and contagious, in particular when they are asymptomatic,” Charles Michel, who chairs EU summits, wrote in a newsletter this week. “We must coordinate the approval of those tests in order to ensure that they are recognized Europe-wide.”

The coronavirus pandemic has struck at what is an Achilles heel of sorts for the EU: the prime responsibility of national governments for health policies that, in a crisis, can undermine the bloc’s prized and prosperous single market.

National border closures and curbs on the export of medical gear within the EU during the spring galvanized the Brussels-based commission, the bloc’s executive arm, into actions meant to create a more coherent response.

The commission on Wednesday stepped up such efforts, urging improved national exchanges of epidemiological data and greater use of mobile-tracing applications along with a focus on rapid testing.

The competence, wisdom and goodwill of EU national governments -- and even of local authorities -- remain the key to how well or badly the bloc as a whole will cope in the months to come.

Dutch Prime Minister Mark Rutte has pointed to errors by his own government, telling the country’s parliament on Oct. 14 that “not everything has gone well” in recent weeks.

The Dutch government placed too much emphasis on people’s own responsibility and too little on requirements, fines and measures themselves, according to Rutte. He also said ministers had created uncertainty about the effectiveness of government actions by debating them too freely.

No big changes in EU powers and policies are on the cards. Rather, the video conference is another small step in a laborious effort to balance health and economic interests, with potentially significant longer-term political implications.

“The question of how we will get through this pandemic will be decisive for the health of a very large number of people,” German Chancellor Angela Merkel, a trained scientist, said at the EU summit in mid-October. “This question is crucial in terms of how many people will have to die. What is also at stake is our economic performance.”