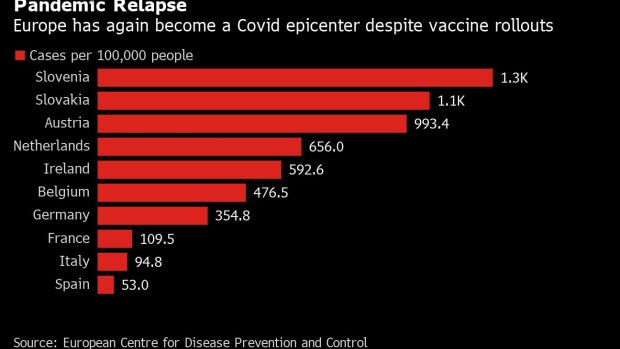 (Bloomberg) -- European countries are increasingly forcing reluctant companies to let employees work from home in an effort to break the rapidly spreading fourth wave of the coronavirus pandemic.

Germany is poised to agree on mandatory remote working as long as there are no “operational reasons” that stand in the way, while in Ireland people have been instructed to work from home where possible starting Thursday. The Belgian government on Wednesday agreed that employees should work from home four days a week into mid-December.

The moves are part of a wider effort to contain a surge in coronavirus infections across the region, despite vaccination rates of around 70% and higher in many countries.

New measures are being introduced which restrict access to public places for people who aren’t inoculated as authorities try to increase pressure on those who’ve resisted getting a Covid shot.

Chancellor Angela Merkel has called the situation in Germany “dramatic” and warned on Wednesday that the fourth wave of the pandemic is hitting Europe’s biggest economy  “with full force.”

The eastern state of Saxony, which has one of the country’s lowest vaccination rates, is considering across-the-board lockdown restrictions, the Bild newspaper reported on Thursday.

Volkswagen AG, Europe’s largest automaker, advised its German employees to start working from home wherever possible as of Monday. It’s preparing to adopt new rules that only allow access to factories and offices for people who are vaccinated, tested or have recovered from a Covid infection.

The industrial giant also plans to ramp up its own capacity for vaccinations at its sites toward the end of this month, including for booster shots.

The number of coronavirus cases in Germany rose by more than 60,000 for the first time in the 24 hours through Thursday morning, according to the latest data from the RKI public-health institute. Covid infections surged by 65,371, while the number of deaths from the disease jumped by 264, taking the total to 98,538.

Merkel and Olaf Scholz, the Social Democrat set to replace her as chancellor early next month, will hold talks with regional premiers to coordinate the next steps -- including the work-from-home measure -- later on Thursday.