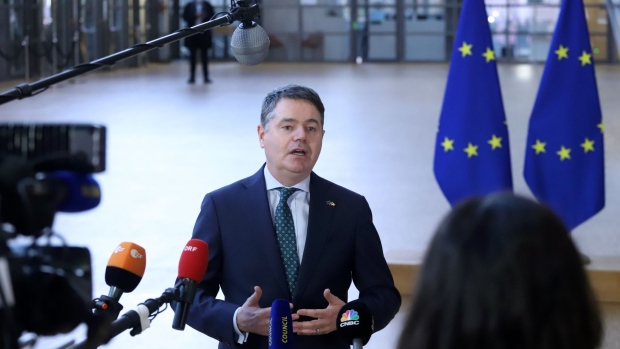 Paschal Donohoe, Ireland's finance minister, speaking to members of the media as they arrive for meetings of the Eurogroup and European Union (EU) Economic & Financial Affairs Council (ECOFIN) in Brussels, Belgium, on Monday, Jan. 17, 2022. Germany's Finance Minister Christian Lindner makes his debut at the gathering of euro-area finance ministers in Brussels today, along with newly appointed counterparts from the Netherlands, Austria and Luxembourg. , Bloomberg

(Bloomberg) -- Europe’s latest push to revive long-stalled negotiations over a single market for banks risks being undermined by efforts to change the rules for winding down failed lenders.

The plan, presented last month by Eurogroup President Paschal Donohoe, calls for the gradual creation of a joint deposit insurance along with other measures. Bank executives have long argued that a single market where they can freely move around deposits and capital is needed to be able to compete with their bigger and more profitable Wall Street peers.

But some countries are seizing on the opportunity to try to water down a seven-year old framework that forces investors to take losses when banks fail, according to people familiar with the matter. That’s a red line for other countries such as Germany, said the people, asking not to be identified as the discussions aren’t public.

Since publishing its roadmap to a banking union a decade ago, the euro region has made progress in common bank supervision and set up an authority to wind down failed lenders, leaving a joint deposit insurance as the main obstacle. Yet the dispute over whether to soften existing rules for a bail-in calls into question whether finance ministers can agree on a path forward at a meeting next month when the proposal is scheduled for debate.

“We don’t want to see a weakening of bail-in, it was a clear lesson of the financial crisis that a bank’s owners need to be liable and creditors shouldn’t be off the hook either,” said Florian Toncar, a German deputy Finance Minister. “That would be a big step backward. We don’t want to see the current rules weakened.”

Europe’s resolution framework has been in effect since 2015. While several banks have since failed, the process of enforcing losses on a wide base of investors has remained relatively untested. The most notable case so far was Banco Popular Espanol SA in 2017, when the Single Resolution Board -- Europe’s joint authority -- wrote down the lender’s common equity and Additional Tier 1 bonds. Its Tier 2 notes were converted into new shares and transferred to Banco Santander SA for the price of 1 euro.

Authorities in other countries have used loopholes to protect senior bondholders from losses at lenders that run into trouble. Banca Monte dei Paschi di Siena SpA won approval for a capital injection by Italian taxpayers in 2017, the same year the country committed billions of euros for the liquidation of two smaller banks that buckled under the weight of soured loans.

In Europe, at least 8% of a failed lender’s liabilities need to be “bailed in” -- meaning investors will have to take losses -- before the region’s bank failure fund can be used to absorb losses. Shareholder equity is wiped out first, with subordinated debt holders then taking a hit and even senior bond holders ultimately facing the prospect of losses.

Lowering the bar could help banks considered as risky reduce their funding costs, while increasing the likelihood that the bloc’s Single Resolution Fund would have to mop up losses at failed lenders. The fund is made up of contributions by banks, but backed by taxpayers if it is depleted.

The proposal by Donohoe would foresee a bigger role for the SRB, which oversees the fund, according to a document obtained by Bloomberg. Smaller banks would be added to its remit and it could rely on national deposit guarantee systems at an earlier stage, the draft shows.