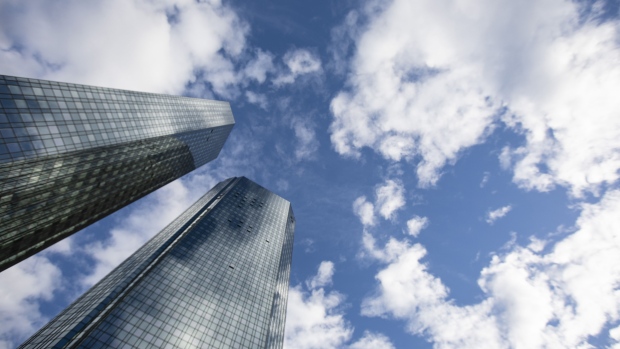 European banks are joining U.S. peers in saying the pandemic won’t wreak as much havoc in their balance sheets as feared.

Almost all big European lenders to report first-quarter earnings so far have bolstered profit by stashing less money for doubtful loans than last year or by freeing up reserves. Deutsche Bank AG, Banco Santander SA and Lloyds Banking Group Plc are among the firms to argue that rosier economic prospects justify such moves. 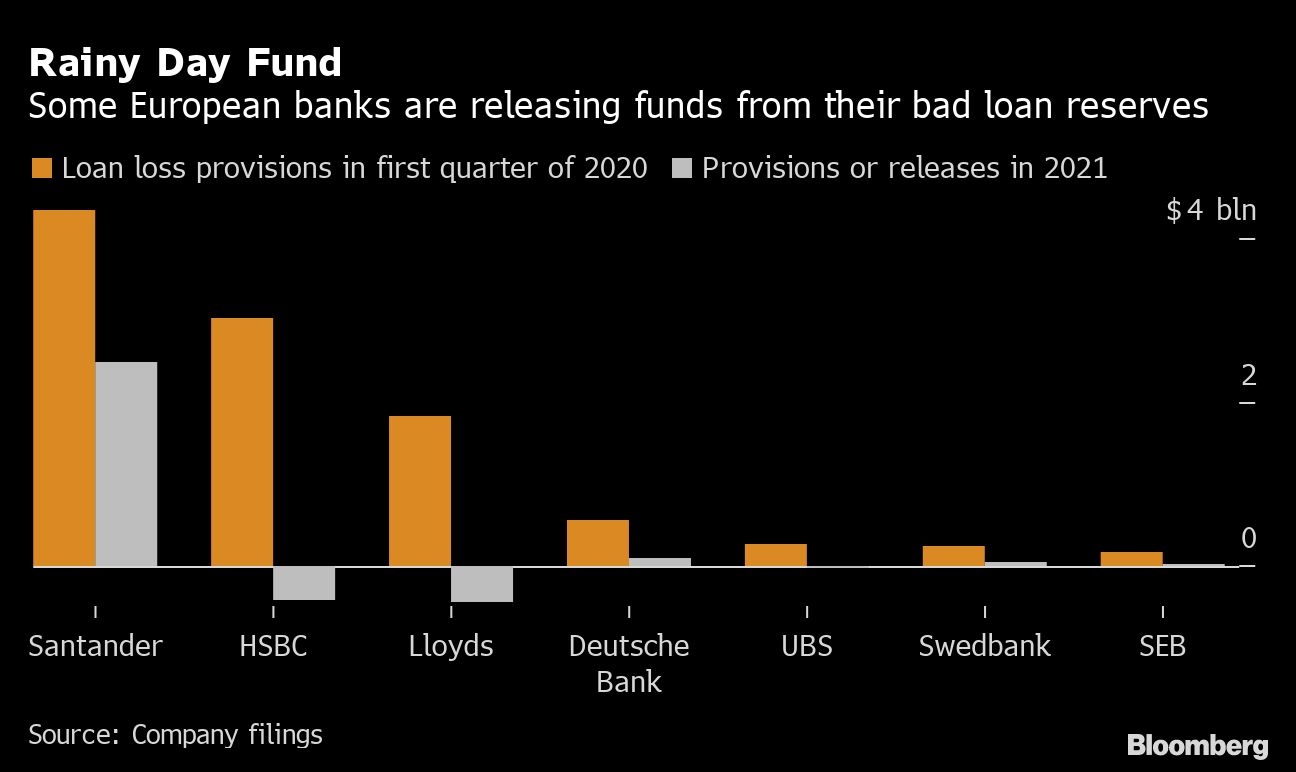 Banks around the world set aside billions of dollars last year to swallow losses from an expected wave of defaults, yet unprecedented support from taxpayers and central banks has kept the economy afloat. While banks and regulators are still warning they face risks when government support comes to an end, most are signaling the expectation that growth will still return quickly.

“We’re much more optimistic than we were a couple of months ago,” Ewen Stevenson, the chief financial officer of HSBC Holdings Plc, said in a Bloomberg TV interview on Tuesday. “If you look at what really fueled the results this quarter, it’s really been the success of the vaccine programs and the strong turnaround that that’s had on credit.”

Lenders point to the health of their mortgage portfolios and say corporate clients are also in good shape. Manufacturers and exporters “have managed to keep up activity” while firms are holding back on investment, meaning that their deposits are increasing, according to Sweden’s Swedbank AB.

Still, not all countries have rolled out mass vaccination programs and those economies that lag may be be slower to recover. The outlook for industries like tourism is also clouded by uncertainty over the lifting of social-distancing and travel restrictions. 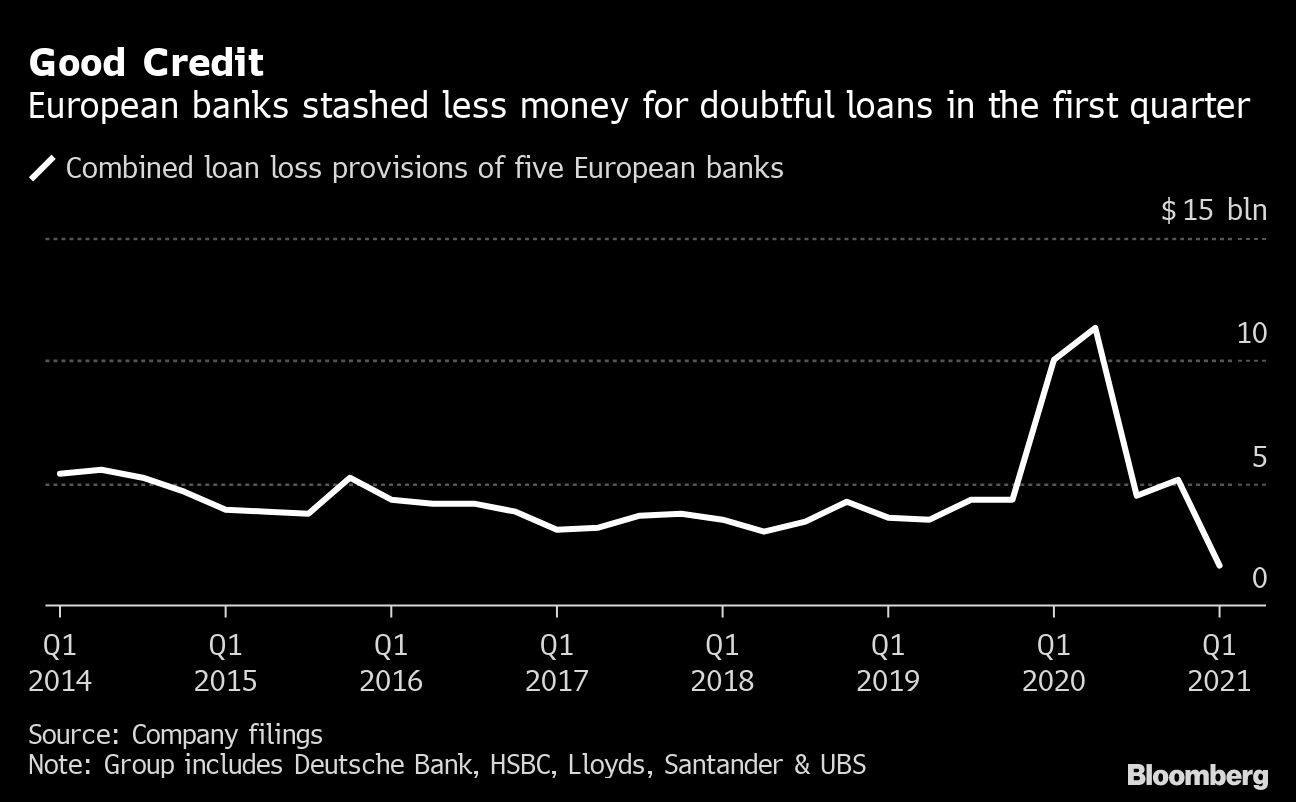 UBS Group AG expects U.S. economic growth to rebound 6.1 per cent this year, up from a previous estimate of 3.3 per cent. At the same time, the Swiss bank cut its growth forecast for the euro-area economy -- where the vaccination pace is slower -- to 5 per cent, down from 5.2 per cent.

HSBC is also concerned about the emergence of new variants of the virus and potential resistance to existing vaccines, said Stevenson. The explosion of cases in India is “tragic,” he added.

Other authorities are keen to avoid sounding the all-clear, given the economy still benefits from extensive support from taxpayers. In a worst case scenario, “postponed insolvencies would suddenly materialize and trigger a recessionary dynamic, potentially causing further insolvencies,” the European Systemic Risk Board said in a report published on Wednesday. “The current low rate of insolvencies would then be similar to the sea retreating before a tsunami.”

The European Central Bank has also urged lenders to look closer at the credit risks they face as the full extent of the distress in loan books hasn’t become evident yet.

Eurozone banks say the bump to profit helped them build up funds that they can return to shareholders once the ECB lifts restrictions on dividends in October.

Europe isn’t “off the hook in terms of a potential increase in non-performing loans,” said Carlos Suarez Duarte, a credit analyst at Allianz Global Investors in London. “There’s a chance they’ll go higher when the furlough schemes end -- but not in the magnitude that was expected.”

“Is there still a possibility that some cliff edge effects could take place? Of course,” von Moltke told reporters on Wednesday. “But it has not been our experience and it’s not really our expectation. We nevertheless have retained a conservative overlay to protect for that event.”