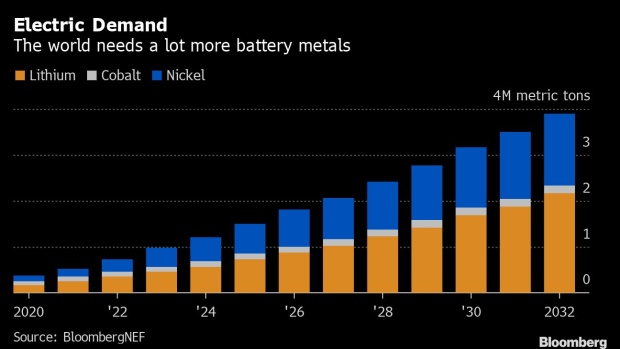 The decision announced Thursday shows how it’s getting increasingly difficult to build new mines -- even for commodities at the center of the world’s efforts to decarbonize. Both battery and carmakers face growing concerns about future supply of lithium, and prices have spiked to records this year as demand surges.

Serbia has put a “full stop” on Rio’s Jadar project, Prime Minister Ana Brnabic told reporters. The project has become a hot-button issue with less than three months before general elections in Serbia, after a groundswell of opposition over environmental concerns brought cities to a standstill during marches in December. Public pressure on Brnabic and President Aleksandar Vucic has continued to intensify even after the government offered a referendum on the mine.

It’s also a serious blow to Rio’s new CEO, Jakob Stausholm, who’s only been in the job for a year. Approving the Jadar project was one of his first big decisions as the company seeks to move on from the destruction of a 46,000-year-old Aboriginal rock shelter that cost his predecessor his job.

Rio only announced its plans to develop the $2.4 billion project in July. Yet the commitment came before the company had secured all the licenses it needed and quickly became a political issue, seized on by both environmentalists and opposition politicians. That led to thousands of protesters taking to the streets in late 2021.

The opposition Rio faces is being replicated around the world as communities decide that the offer of jobs and taxes that mining offers often isn’t worth the inevitable impact on the local environment. Copper projects in Peru and the U.S., to lithium mines in Nevada are among mines with resources essential to the global energy transition that are currently facing major roadblocks.

On paper, Rio’s lithium project should have been a sure thing. The mine was planned to be built on farmland, not virgin forest, and be just a 10-hour drive from Germany’s car-making epicenter.

Rio Tinto has always operated in compliance with Serbian laws, it said in a statement after Brnabic’s announcement.

“Rio Tinto is reviewing the legal basis of this decision and the implications for our activities and our people in Serbia,” it said.

Rio had initially said it planned to start operating at the mine in 2026. However, the company said earlier this week it was now expecting first production no earlier than 2027, due to delays in receiving a license it needed before publishing an environmental-impact assessment.

The zoning plan and all decrees related to the project have been canceled, Brnabic said Thursday. “We met all the demands of environmentalist protests and put a stop to Rio Tinto in Serbia,” she said. “Everything is finished. It’s over.”

She didn’t respond to questions on whether the government would allow lithium mining in the future.

When Rio announced the project, it said it was dependent on it getting the necessary approvals in Serbia. At the time, it was the first big move by a mining major into lithium, though Rio has since also agreed to buy a lithium project in Argentina.