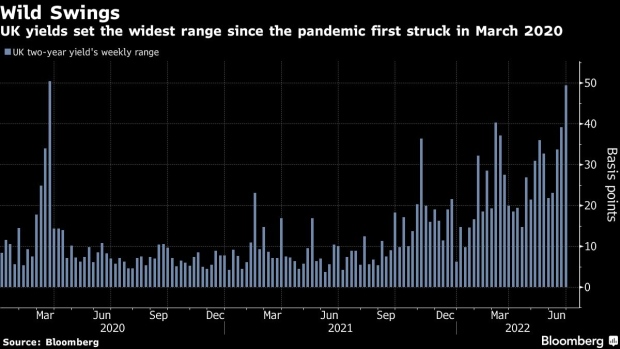 Investors are changing their mind on Europe’s bonds. And fast.

On Thursday alone, German two-year yields plunged the most since the height of the 2008 crisis, just a week after their biggest one-day rise in a month. The rate on the 10-year security has tumbled almost 50 basis points from a peak earlier in June, the fastest drop in over a decade.

The sentiment filtered into other markets, with short-dated UK gilts posting their biggest weekly swing since the pandemic struck. A batch of bad economic data was the catalyst, driving traders back into the safety of government debt, with commentators increasingly expecting further gains.

The potential for a recession is luring back funds to an asset class that’s been shunned for month as inflation soared and where yields are now near the juiciest in a decade. Growth fears are also leading markets to trim bets on how much tightening the European Central Bank stands to deliver. A gathering of policy makers this week at Sintra in Portugal will be watched for further clues.

“The data is already telling us that the outlook is pretty weak for Europe,” said Sandrine Perret, fixed-income strategist at Vontobel Asset Management, who has been buying government bonds since last month. “More price pressures, tightening financial conditions -- these are all having a very negative impact on the economy, which really makes bonds at these levels a pretty attractive asset class.”

Europe has been at the epicenter of growth headwinds from the slowdown in China to the energy standoff with Russia. An indicator of economic activity in the euro-area tumbled to a 16-month low, forcing investors to switch their focus from inflation to the impact of tightening financial conditions.

Global markets are hyper-alert to any signs of recessionary risk. Federal Reserve Chair Jerome Powell has reiterated his “unconditional” commitment to bringing inflation back to target, which prompted commodity markets to weaken in anticipation of lower demand.

“Recession risk is elevated in the euro area,” wrote Jari Stehn, chief European economist at Goldman Sachs Group Inc., adding he sees a 40% probability of one over the next year.

The ECB’s own hawkish rhetoric has cemented bets on its first rate hikes from next month. But traders are tempering their exuberance longer term, with money markets wagering on about 220 basis points of tightening in a year’s time, down from 300 basis points earlier this month.

“Certainly in Europe, bond yields have peaked,” said Mark Nash, head of fixed income alternatives at Jupiter Asset Management. “With commodities falling, with growth weak, with the ECB hawkish, their job is a lot easier to push down inflation pricing out the curve.”

Nash took a small long position in European bonds last week for the first time in four months, targeting the five-year segment of the curve. He sees the yield on five-year German bonds dropping from 1.2% to 1%, with markets convinced that the central bank has “done enough” in its plan for policy normalization. That isn’t true yet for the US Treasury market, where the growth outlook is stronger, he added.

Still, investors are alive to the risk that inflationary pressures could again surprise to the upside. June consumer-price growth for the euro zone due this week is expected to break a previous record high, according to a Bloomberg survey of economists.

While RBC strategists see 10-year German yields potentially dropping to the 1.20-1.35% level -- from around 1.44% on Friday -- they are hesitant about the “temporary stability” that this shift in focus could afford bond markets. It’s too early to get strategically long on bonds, they wrote in a client note.

“With the next CPI data we’ll have to see how things play out, but on a three-to-six month horizon we think the macro factors will take a bit more weight in the market,” said Vontobel’s Perret. “That will help to at least stabilize the bond market.”

Policy makers will gather at the ECB’s forum on central banking in Sintra, Portugal, offering plenty of opportunity for President Christine Lagarde and her colleagues to share their views on the outlook for monetary policy and growth. Bank of England Governor Andrew Bailey will speak at the conference as will Deputy Governor Jon Cunliffe.