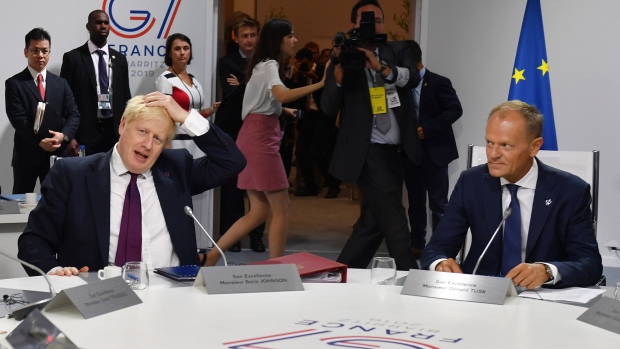 U.K. Prime Minister Boris Johnson will on Sunday step up his campaign to convince the European Union to reopen Brexit negotiations as he uses the G-7 summit in France to test the bloc’s united front.

Johnson, in optimistic mood after meetings with German Chancellor Angela Merkel and French president Emmanuel Macron in the past week, will sit down in the Basque beach resort of Biarritz with European Council President Donald Tusk, his first meeting on Brexit with an EU official. Johnson started Sunday with breakfast with U.S. President Donald Trump, who described him as “the right man for the job” to take the fight to the Europeans.

It won’t be easy. While EU leaders are politely listening to Johnson, they have given no indication they’re ready to give the prime minister the concessions he’s asking for. With just over two months until the U.K.’s scheduled leaving date, the prospect of Britain leaving the bloc without an agreement and the safety net of a transition period is looming.

The meeting with Tusk may be tense.

Tusk has been one of the most vocal critics of pro-Brexit British politicians like Johnson, saying in February “a special place in hell” was reserved for those who promoted it without a plan. On Saturday he said Johnson risked going down in history as “Mr. No Deal.” Johnson shot back that Tusk would be "Mr No Deal" unless the EU can offer some concessions to the new British government.

Behind the scenes, several member states have started to question whether the EU’s stance is too hardline, EU officials said. Governments are acutely aware Johnson is already gearing up to blame them if Brexit comes without a deal.

Since the most contentious aspect of the deal concerns measures to avoid a hard border between the U.K. and Ireland, much depends on the Irish government, which is so far standing firm, both in public and in private.

“We are willing to listen to ideas that are operational, realistic and acceptable to all member states, including Ireland, if and when the U.K. government is ready to put them on the table,” Tusk told reporters on Saturday.

The U.K. doesn’t see it that way. As far as the British government is concerned, it’s for the EU to start the ball rolling by agreeing to reopen negotiations, a U.K. official said. If they’re not prepared to do that, Britain doesn’t see the point in making concrete proposals. This stalemate is likely to continue for at least a couple of weeks, the official said.

While there’s no indication the bloc is ready to cave to Johnson and ditch the contentious “backstop” mechanism, which avoids the need for controls on the Irish border by keeping the U.K. aligned to EU customs and trading rules, the bloc is beginning to discuss whether there are ways to make it more palatable, according to the officials who spoke on condition on anonymity.

“I say to our friends in the EU, if they don’t want a no-deal Brexit then we’ve got to get rid of the backstop from the treaty,” Johnson told reporters on the flight from London to France.

Part of Johnson’s strategy is to line up a trade deal with the U.S. to help show the benefits of leaving the EU. He has to tread carefully, knowing that Trump’s America-first instincts don’t fit with the “global Britain” free-trading nation that Johnson is trying to establish post-Brexit.

On Sunday morning, Johnson used a breakfast meeting with Trump to raise a post-Brexit trade deal with the world’s biggest economy. Sitting opposite the U.S. president, he said he’d made clear that Britain’s National Health Service would be off the table in any trade deal and that Trump had agreed.

Trump said that it would be possible “to do a very big trade deal, bigger than we’ve ever had with the U.K.” because it will no longer have the “anchor around the ankle” represented by the EU. Johnson, for his part, said he knew the talks would be tough, but “there are huge opportunities for the U.K. to penetrate the American market.”

Speaking to reporters on Saturday, Johnson unveiled a laundry list of British products and industries that he said needed to see greater access to U.S. markets, ranging from shower trays and Melton Mowbray pork pies to cars and insurance.

“There are massive opportunities for U.K. companies to open up, to prise open the American market,” Johnson said. “We intend to seize those opportunities but they are going to require our American friends to compromise and to open up their approach because currently there are too many restrictions.”

To contact the reporters on this story: Ian Wishart in Biarritz, France at iwishart@bloomberg.net;Alex Morales in London at amorales2@bloomberg.net

To contact the editors responsible for this story: Ben Sills at bsills@bloomberg.net, Flavia Krause-Jackson