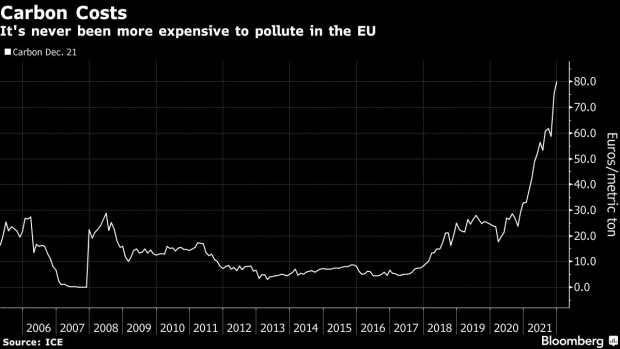 Cooling towers at the Jaenschwalde lignite-fired power station beyond a conveyor bridge at the Jaenschwalde open-cast lignite mine in Jaenschwalde, Germany, on Thursday, Oct. 28, 2021. The G-20 is meeting in Rome this weekend right before COP26 in Glasgow, the United Nations gathering that aims to set specific goals to wean nations off coal and other noxious substances for good. , Bloomberg

(Bloomberg) -- European carbon futures rose above 80 euros ($90.272) a ton on Friday for the first time, testing the resolve of politicians who are promising to act aggressively on climate change while also grappling with rapid inflation that’s tearing into economies across the globe.

The cost of polluting has increased more than 140% this year after a stricter environmental agenda in Europe was laid out and a sweeping rally in gas prices made dirtier coal more economic to use for power generation. The futures price rose as much as 0.7% Friday to 80.42 euros a metric ton on ICE Endex in Amsterdam.

The fast-paced increase in carbon prices has taken policy makers by surprise. Making it expensive to emit is meant to push dirty fuels out of the power generation and industrial processes. Right now, that’s not really happening. Soaring natural gas prices mean Europe will likely see emissions increase this year as coal plants burn profitably through the winter. That’s uncomfortable for many leaders that made loud pledges at the climate talks in Glasgow last month.

In the long-term, a high carbon price could accelerate investment in methods to cut emissions or switch to cleaner fuels. Technologies like carbon capture and storage or hydrogen production from renewable energy become more economically viable if the carbon price remains at or above current levels.

With inflation already surging, making it more expensive for companies to produce widely-used chemicals and materials isn’t going to help. Rapidly rising carbon prices are stoking fears that the European Commission could step in to limit speculation in the market.

As the year comes to a close, a handful of other technical factors are also pushing permits higher. A large amount of options for carbon at 80 euros by the end of the year are set to expire on December 15. That’s likely driving investors who sold the out-of-the-money options to manage their risk by buying futures. The final auction of the year is also set for December 20, kicking off a period when the market will have no new supply until governments start selling permits again in January.

Carbon’s rally is likely far from over according to Per Lekander, managing partner at Clean Energy Transition LLP. He expects the permits will surge past 100 euros in the next few weeks as utilities continue to buy allowances to account for their emissions from burning coal this year.

Record pollution costs are also likely to be raised by some heads of government at an EU summit scheduled for Dec. 16-17.