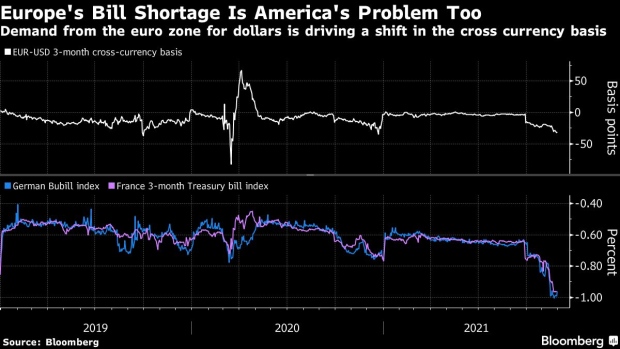 Europe’s increased pile of spare cash now appears to be spilling over into U.S. money markets, which were already dealing with a glut of their own that’s been distorting borrowing costs.

That’s likely to simply increase downward pressure on overnight rates and amp up demand for safety valve facilities like the Federal Reserve’s reverse repurchase agreement operations, where more than a $1 trillion is stashed on a daily basis.

Excess cash in the European economy rose to 4.5 trillion euros ($5 trillion) earlier this month thanks to the European Central Bank’s bond-buying program and ultra-cheap loans. Combined with a push by European banks to get their balance sheets in order for auditing over year-end, this has sparked a dash for safe liquid instruments such as German bills.

The problem is, there just aren’t enough of these sorts of bills to go around. That’s driven up prices of the securities and dragged short-term funding costs in the euro area last week to a record low.

It’s also sent some scrambling to park cash in other markets, most notably the U.S.

That’s helped to drive the three-month cost to convert payments from euros into dollars using cross-currency basis swaps to its highest level since December 2020.

In times gone by, this kind of move in the euro-dollar basis swap has often signaled a shortage of greenbacks cause by U.S. money-market strains, especially as year-end approaches. But the low rates in U.S. markets and the near record amount of money being parked with the Fed indicate that’s patently not the case.

On top of that, moves of this scale seem largely confined to euro-related markets and absent from dollar-yen markets, suggesting it is very much a Europe focused problem.

Global central bank interventions at the onset of the pandemic are still flooding the system with reserves while removing collateral from the market.

In the U.S., much of the excess cash is currently being mopped up by the Fed facility, but that doesn’t solve everything and the government’s attempts to stay under its legislated borrowing cap by reducing bill issuance at the moment are exacerbating imbalances.

In Europe, meanwhile, governments simply haven’t got enough bills on issue, there isn’t a real equivalent to the Fed RRP facility, and the market mismatch has become clearer as banks rush to shrink their balance sheets ahead of year-end.

If the channels in Europe become clogged, then the “collateral shortage spills over into the FX swap market as euro depositors swap into dollars to park their cash in a deeper, more flexible collateral market,” Credit Suisse strategist Zoltan Pozsar wrote in a note to clients last week.

The remedy, in Pozsar’s view, is for Europe to create its own mechanism that helps convert cash into collateral without using dealers’ balance sheets. That could be a Fed-like overnight RRP facility from the ECB and/or an injection of bills by the central bank, he said.

Absent that kind of fix, though, the risk is that pressures will continue flowing across the Atlantic for now.