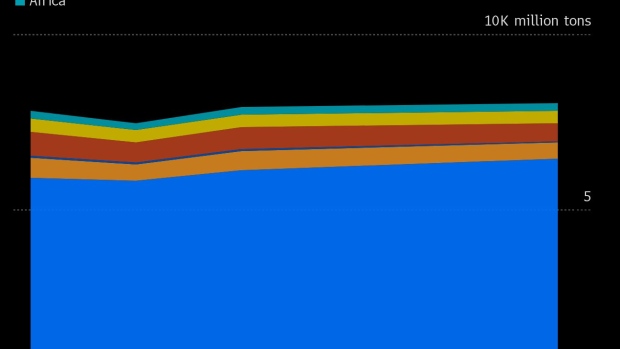 Piles of coal next to cooling towers at Uniper SE's coal-fired power station in Ratcliffe-on-Soar, U.K., on Thursday, Dec. 2, 2021. The recent drop in prices for coal and U.S. gas, as well as limited interest for LNG cargoes from some buyers in Asia, opened the way for added supply into Europe. , Bloomberg

(Bloomberg) -- Europe’s coal utilities aren’t on track to reach their emissions-reductions goals in time to achieve net-zero status by 2050, according to a new study by climate groups.

None of the 21 companies analyzed have plans to realize all of the key milestones needed to attain the goal, said the report by campaign group Europe Beyond Coal and Ember, a think tank that advocates for the transition away from coal. Sixteen have pledged to reach net-zero by mid-century, it added.

“Utilities need to step up their plans to get onto renewables and be more transparent about it,” Ember analyst Sarah Brown, a lead author of the study, said in an interview. “We can’t just rely on market forces alone.”

The European Union is trying to wean itself off dirtier energy sources like coal, while expanding renewables like wind and solar in order to hit its own climate targets. At the same time, the continent is battling an energy crisis driven by a shortage of natural gas, which has forced up the price of power and driven utilities to rely on all sources of energy they can get.

The report’s authors compared utilities’ plans with the International Energy Agency’s net-zero roadmap. The IEA includes a target for advanced economies to close unabated coal plants -- those that don’t seek to capture their carbon emissions -- by 2030 and secure zero-emissions electricity by 2035.

The study found that nine of the utilities analyzed have committed to a global coal phase-out by 2030, and all 21 would be operating fossil gas power plants in the EU after 2035. Only Drax Group Plc and Orsted AS were judged to be on track to reach net-zero electricity by 2035. Both are shutting their coal plants by next year and relying on bioenergy with carbon capture to reach net-zero.

Coal groups have said that too quick a move away from the fuel could bring unnecessary economic harm. “The regions which are affected because of the phase out of coal are already suffering,” said Brian Ricketts, secretary-general of coal industry group Euracoal. “If you wish to do it faster, then that becomes more intense.”

The report by Europe Beyond Coal and Ember recommends greater accountability of utilities from shareholders and lenders, and calls for targeted reductions across all emissions scopes. It also warns against “speculative” hydrogen plans that can be used by companies in place of a “detailed plan to exit fossil gas.”

“It is important to keep judging these companies by their short- and medium-term renewable energy goals, as net-zero targets are often set far into the future,” said Felicia Aminoff, an energy-transition analyst at BloombergNEF. “It is easier for utilities to transition towards clean power and phase-out their coal fleets if governments provide a supportive policy environment.”