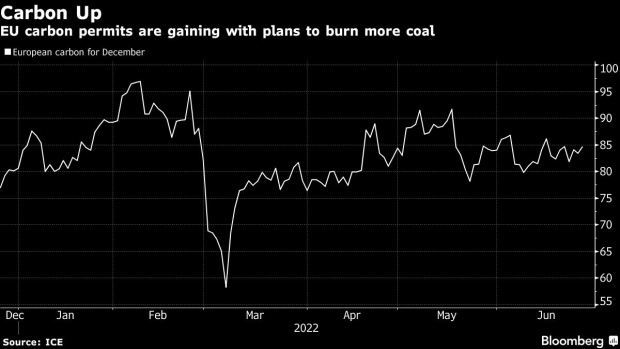 (Bloomberg) -- European plans to mobilize idle coal-fired power plants across the continent are pushing up the price of carbon permits needed to burn the dirtiest fossil fuel.

Germany plans to reopen around 10 gigawatts of coal capacity to replace gas-fired generation, along with similar moves to increase burning of the fuel in the Netherlands, Austria, Belgium and France. That means utilities using coal need to buy up more permits in the European Union’s Emissions Trading System to be compliant, tightening their supply.

The plans for coal will “yield an even higher pressure on emissions” permits this week, analysts at ClearBlue Markets said in a note. Their position is bullish for the days ahead, helped by an increased need for hedging during rising energy prices, they said.

The market is waiting for agreement on the European parliament’s plan to accelerate emission cuts to 63% by the end of the decade from 2005 levels compared with 61% proposed by the European Commission. Agreement would support long-term bullish sentiment, Redshaw Advisors Ltd said in a note.

European carbon allowances for December rose as much as 1.5% on Monday to 84.71 euros per ton on ICE. German year-ahead power, the benchmark for Europe, rose as much as 2.3% to trade around 262 euros per megawatt-hour before paring some gains.