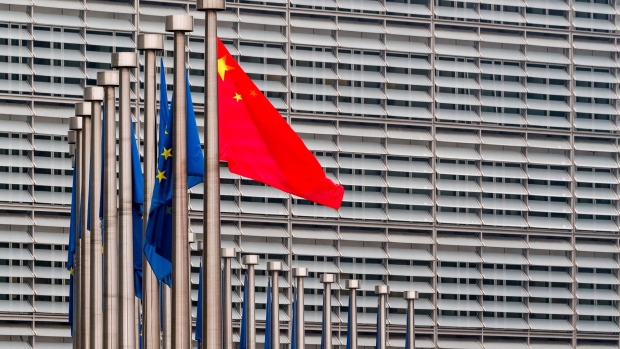 China’s national flag, flies in front of European Union (EU) flags outside the Berlaymont building during the EU-China summit in Brussels, Belgium, on Tuesday, April 9, 2019. The EU and China managed to agree on a joint statement for Tuesday’s summit in Brussels, papering over divisions on trade in a bid to present a common front to U.S. President Donald Trump, EU officials said. , Bloomberg

(Bloomberg) -- After more than seven years of negotiation with Beijing, the European Union’s landmark deal with China landed with a thud. Ill-timed, unenforceable and naive were just some of the charges leveled at the Comprehensive Agreement on Investment concluded Dec. 30.

Now, after a week of relative silence, governments are fighting back at criticism they see as unfair. Interviews with government officials in Europe’s main capitals showed a common conviction that the deal not only contains real concessions by Beijing, but that it puts the EU on a stronger footing to reengage with Washington after four years of antagonism by U.S. President Donald Trump.

Rather than a rebuke to the incoming administration of President-elect Joe Biden, as critics have charged, the accord represents the first step back to a multilateral order after Trump’s “America First” stance, according to a senior official in Berlin. The U.S. needs Europe as a global player, not a vassal, so it’s in American interests that the bloc presents itself as a geopolitical force in its own right, said another senior official in Rome.

“Yes, it may be seen as more of a strategic, autonomous approach towards China,” and one that Biden may not like, Sigmar Gabriel, the former German foreign minister and vice chancellor, told Bloomberg Television. “But on the other hand there is enough room to maneuver to join hands” and forge a common stance on China.

European lawmakers and China watchers on both sides of the Atlantic argue the bloc’s leaders were naive to trust Beijing on the deal’s provisions on sustainable development, including commitments on forced labor that they say will never be met. By signing the agreement now, EU leaders are gifting China a diplomatic coup as it quashes dissent in Xinjiang and Hong Kong, they say.

EU officials say that the deal, which commits China to provide greater market access, potentially increasing bilateral trade worth some $650 billion in 2019, was as good as it could get and significantly more than anyone else has achieved. The investment deal isn’t devised to address human rights issues, but still grants Europe leverage in its discussions with China, according to French President Emmanuel Macron’s office. The Italian official said it would have been unthinkable until recently to bring China toward adherence on international standards on workers’ rights.

“This is the most ambitious outcome on market access, on the level playing field and on sustainable development that China has ever agreed with a third country,” Valdis Dombrovskis, EU Commission executive vice-president in charge of economic matters, told reporters on Dec. 30 in Brussels. While “not a panacea” for all Europe’s issues with China, “it certainly helps to address a number of challenges.”

Macron and German Chancellor Angela Merkel, who joined a video call with EU leaders and President Xi Jinping on Dec. 30, see the CAI as a start, with ongoing talks with China on issues outside the scope of the deal to come, according to the French president’s office. These include climate, where they want China to “green” the Belt and Road Initiative; global health, with vaccines to become a universal asset; debt relief for Africa; and human rights.

A core charge directed at the EU and Germany, as its biggest economy and the deal’s main proponent, is that the 27-member bloc is handing Beijing ammunition in its future dealings with the U.S. It should have held off for Biden to take office to agree on a common approach to China, the argument goes.

Jake Sullivan, Biden’s national security adviser, said in late December that he would welcome “early consultation” with Europe on joint concerns about China, but the deal was done anyway. He avoided criticism of Europe in a weekend interview with CNN, saying that “we are confident we can develop a common agenda” with partners on those concerns, from human rights to technology.

In Europe, however, where the Trump administration has slapped tariffs on steel and aluminum, berated leaders over defense spending, and attempted to torpedo the nuclear deal with Iran, key governments regard the deal as a demonstration of their collective ambition to stake out a role for the EU in a world increasingly defined by great power rivalry. While not directed against the U.S., it’s a demonstration of Europe asserting itself, according to the Elysee.

“Obviously this has created some friction, but it’s also sent a message that when we’re talking about China, coordination with the United States cannot and will not translate into the United States telling Europeans what to do,” said Nathalie Tocci, director of the Institute of International Affairs in Rome. “We share notes, we agree more often than we disagree, but we don’t always have the same position. This is what a more balanced relationship means.”

For Joerg Wuttke, president of the EU Chamber of Commerce in China, who has seen the deal-making up close over the long years of its progress, criticism of the final outcome fails to acknowledge the nature of interacting with Beijing. He compared it to “barking at the Great Wall of China,” with the result that “nothing will happen.” Instead, he said, “we managed to get through the door.”