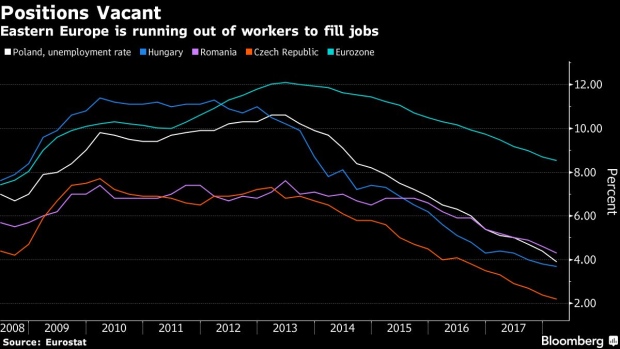 The Church of Our Lady before Tyn, right, stands among residential and commercial property on the city skyline in Prague, Czech Republic, on Thursday, Jan. 4, 2017. The Czech Republic posted its biggest ever budget surplus last year after the government spent less than planned and economic growth boosted tax receipts, a rare success that ruling party leaders seized on to stake out their positions before fall elections. Photographer: Martin Divisek/Bloomberg , Bloomberg

(Bloomberg) -- After three decades of unprecedented advances in incomes and living standards, the European Union’s eastern economies that abruptly swapped communism for capitalism after the Berlin Wall fell are facing new challenges.

Like much of the continent, shrinking populations pose a threat to future expansion -- but the United Nations predicts the former Eastern Bloc will suffer more than most regions. Labor shortages are already widespread and record-low unemployment has left many posts vacant.

For now, the phenomenon is ramping up wages and boosting consumption -- a welcome boost as U.S.-China trade tensions ripple through to Germany, a key export market.

But salary growth is outpacing productivity, eroding competitiveness. National governments, meanwhile, reject EU-mandated refugee quotas that would provide workers, only accepting immigrants from nearby countries such as Ukraine. Those arrivals can’t go on forever.

“At the moment, they’re muddling through,” said Beata Javorcik, the new chief economist at the European Bank for Reconstruction and Development, which was set up in 1991 to assist the post-communist transition by investing billions of dollars in projects from infrastructure to banking.

“Ideally you’d like to stimulate population growth but that’s very hard to do,” she said in an interview at the EBRD’s headquarters in London.

EU membership that began in 2004 prompted millions of workers to head west, where pay is higher. Back in places like Poland, a reduction in the retirement age is further reducing the workforce. Critics say increases in child benefits aimed at boosting fertility rates are persuading some women to stay at home.

The latter trend comes amid progress in ending the male dominance in high-level positions: Javorcik is the first woman to take the EBRD’s top economic job. Bulgarian-born Kristalina Georgieva recently took the helm of the International Monetary Fund.

The region’s past may have actually helped here.

“One of the few positive legacies of communism was relative gender equality,” said Javorcik, 48. Women “were often treated as equals in the workplace.”

As well as demographics, Javorcik deems climate change and the burden on nations to emit less carbon as another test. Poland, her homeland and the EU’s biggest eastern economy, is the bloc’s largest coal producer and has seven of its most-polluted cities. Renewable energy accounts for less than 12% of the total.

The innovation required to shift away from fossil fuels could accelerate eastern Europe’s evolution from a center for cheap labor in industries such as carmaking.

“The easy sources of growth have been exploited over the past 20 years,” Javorcik said. “Now you need to move to the next phase, and that’s not trivial.”

But progress in recent decades -- from joining NATO to lifting millions out of poverty -- shows what’s possible. Javorcik rejects those who say the catch-up to western EU levels of wealth has been too slow since membership in the bloc.

“There’s a very downbeat commentary about 30 years of transition and I think in many ways it’s unfair,” she said. “These countries have made enormous progress.”

To contact the reporters on this story: Andrew Langley in London at alangley1@bloomberg.net;Aaron Eglitis in Riga at aeglitis@bloomberg.net

To contact the editors responsible for this story: Andrea Dudik at adudik@bloomberg.net, Rob Dawson