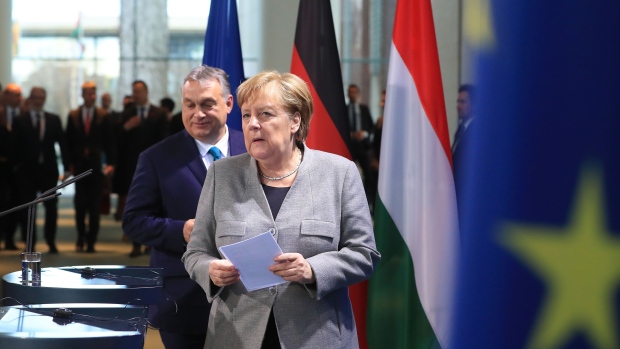 Angela Merkel and Viktor Orban at the Chancellery in Berlin, last year. , Bloomberg

(Bloomberg) -- Viktor Orban is running out of friends in high places.

Orban’s decision to pull his Fidesz party from its European Union parliamentary caucus before it was suspended spells the demise of his alliance with the EU mainstream.

The Hungarian prime minister’s push to the political margins was a long time coming. But his sidelining is symptomatic of a broader alienation of eastern members of the bloc from Poland to Slovenia that have flirted with what Orban calls “illiberal” democracy.

Whereas four years ago populist forces seemed on the ascendancy across Europe, the arrival of U.S. President Joe Biden promising the end of “America First” means the air is getting thinner for leaders who model themselves on Donald Trump. Equally, Angela Merkel’s departure from office this fall denies the likes of Orban the ear of a German leader who kept channels for dialogue open, however stark their differences.

The combination of a U.S. administration less willing to indulge them and a new German leader without Merkel’s attachment to the region threatens to cut the EU’s rebellious eastern members adrift. It may also embolden the European Commission to take tougher action against Poland and Hungary, potentially even suspending financial payments.

“The landscape after a change in Washington and with a prospect of change in Berlin is getting more complicated for the EU and especially for countries like Poland,” said Donald Tusk, a former Polish prime minister who served as EU president until 2019.

“The shift may imply less determination in Berlin to cooperate with eastern Europe” along with a “very principled U.S. position on the rule of law and democracy,” Tusk said in an interview last month.

When Poland’s nationalist president sought re-election last summer, he turned to Trump for a last-minute boost. At the White House just four days before the vote, Trump showered Andrzej Duda with praise for doing “a terrific job” and being a leader that Poles think “the world of.” Duda won the election in the second round, by 51% to 49%.

While Biden should be welcomed across the EU’s east because of his more cautious stance on Russia and hopes for a greater pro-Ukraine push, he’s facing uneasy relations with those leaders who grew close to and admired Trump.

Duda only properly congratulated Biden on his election win on Dec. 15, more than a month after his western neighbor Merkel. The Polish leader has said he doesn’t have any concerns that it will affect relations with the new U.S. administration.

Orban’s government openly supported Trump at the election and is bracing for a return of the cold treatment under the Obama administration. Foreign Minister Peter Szijjarto was cited in EuroNews as saying that Hungary is open to more cooperation with the U.S. if Biden is willing to show more “respect” to Hungary.

As the EU’s longest-serving leader, Merkel has seen Orban cement his hold on power in Hungary by taking over the courts, media and slamming immigrants, most notably during the 2015-16 crisis fueled by refugees fleeing the war in Syria. His anti-immigration stance was both an example to nationalists across the region and a show of defiance against Merkel and her open-doors policy.

She is a still a powerful advocate for the east who has the measure of its conflicts and complexities, having grown up in East Germany and studied in Prague. She is an admirer of Poland’s Solidarity movement, which laid down the path that led to the dismantling of the communist bloc from 1989. All of her likely successors are from western Germany.

“It’s not clear if Germany will continue to have the level of understanding and readiness for cooperation Merkel has had,” said Tusk, a former Solidarity activist. “The communist experience underlined her attempts to understand the eastern part of Europe, especially when it comes to relations between the EU and Russia.”

Merkel’s stance on Russia -- a unifying issue for eastern nations that were Soviet satellites -- is more nuanced. While she is criticized for supporting the Nord Stream 2 gas pipeline from Russia to Germany, she also arranged for President Vladimir Putin’s political opponent Alexey Navalny to be flown to Germany after his poisoning, and visited him in the hospital in Berlin. She continues to press Ukraine’s case after Russia seized Crimea.

Dalia Grybauskaite, who served as Lithuania’s president from 2009 to 2019 and regularly mingled with Merkel at European meetings, recalled a conversation in which she questioned the chancellor about her dealings with Putin.

“Her response was quite a surprise for me -- she hinted she knows who he is and what to expect from him,” Grybauskaite said in an interview. “Even if she’s sometimes humiliated, she will still talk to him. Achieving goals is more important than her own feelings about Putin’s behavior toward her.”

Similarly, her door remains open to Orban despite his role as nationalism’s ringleader.

For all the political friction, economic links to Germany remain strong. Of the EU’s 11 former communist members, seven -- including Hungary and Poland -- have Germany as their biggest trading partner.

Those ties ensure the rebels can only afford to push their grievances so far.

The next test will be over the rule of law. Germany brokered a deal in December that gives the commission power to propose the suspension of budget payments to countries that undermine judicial independence. Hungary and Poland are currently subject to EU probes.

With Merkel not standing in Germany’s fall election, she soon won’t be around to intervene on their behalf, even if she wanted to.

“I’m afraid that part of the new post-Merkel leadership might have a stereotypical attitude towards our region, especially those who did not grow up in eastern Germany or were too young when the Berlin Wall fell,” Ales Chmelar, a Czech deputy foreign minister, said in an interview. “We do not have any other partner like Germany.”