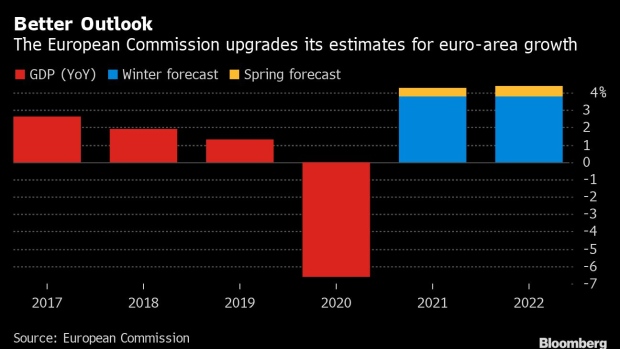 Syringes containing a dose of a Covid-19 vaccine at a mass vaccination center inside the Fira de Barcelona exhibition space in Barcelona, Spain, on Sunday, May 2, 2021. Western Europe is heading toward a critical phase in its fight against the coronavirus pandemic as accelerating vaccination rates open up the prospect of easing lockdowns and reviving economies. Photographer: Angel Garcia/Bloomberg , Bloomberg

(Bloomberg) -- The euro-area economy will grow more quickly this year than previously forecast as the region’s vaccination campaign gathers speed, fiscal support is rolled out and a strong global rebound helps exports.

The European Commission upgraded the euro area’s growth for this year to 4.3% from 3.8% after taking account of the 800 billion-euro ($971 billion) joint recovery fund for the first time. Output in the European Union’s 27 member states is now expected to reach its pre-pandemic size by the end of this year, earlier than initially thought.

The currency bloc is also expected to grow more quickly in 2022, when more money from the joint stimulus will flow into projects to build a greener and more-digital future. The recovery will still be uneven within the EU, with economies in France, Spain and Italy not reaching their pre-pandemic levels until 2022.

“While we are not yet out of the woods, Europe’s economic prospects are looking a lot brighter,” Valdis Dombrovskis, EU Commission executive vice president, said in a statement. “Much hard work still lies ahead, and many risks will hang over us as long as the pandemic does.”

The upgrade brings the commission’s forecast for this year roughly in line that of the International Monetary Fund, which raised its outlook for the euro area to 4.4% last month. The European Central Bank presents new forecasts in June.

The commission said the unprecedented support from national governments to prop up businesses and households during the pandemic pushed euro-area public debt to 100% of gross domestic product last year, the first time that level has been reached. It is expected to peak at 102% before falling slightly to 101% in 2022. Italy’s debt is seen reaching 160% of gross domestic product this year.

Close to 29% of the EU’s population have now received at least one jab, and signs of a rebound are already piling up. Investor confidence in the German economy, the region’s largest, jumped to the highest level in more than 21 years this month and European manufacturing is booming, even if the sector faces shortages of parts and raw materials.

This has fueled a debate about a jump in prices after years of subdued pressure, despite ECB officials saying they they expect any elevated inflation to be temporary.

The commission’s forecast supported that view, with inflation seen reaching 1.7% this year before falling back to 1.3% in 2022. Price growth could turn out higher if the rebound is stronger than expected or if current supply constraints turn out more persistent, it said.

The commission noted that risks to its outlook will remain high as long as Covid-19 isn’t under control everywhere. The situation in large developing nations presents a global threat as new virus mutations could make a comeback.

It also addressed the debate over how much savings will contribute to the rebound, concluding that surveys suggest they won’t give consumer spending much of a boost. Much of the saving has been by groups least-affected by the pandemic, and are likely to contribute to “growing wealth inequality and an increasing generational wealth gap,” it said.