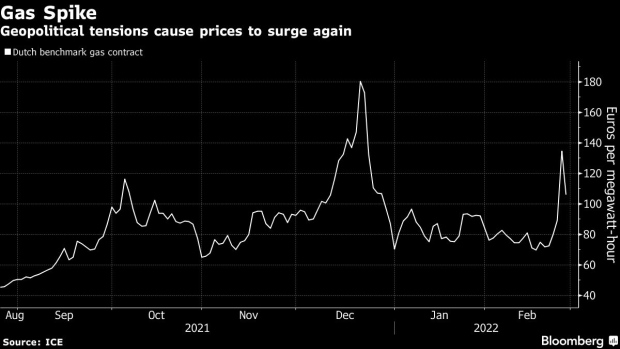 The Staudinger coal and gas power plant, operated by Uniper SE, in Grosskrotsenberg, Germany, on Tuesday, Feb. 15, 2022. Germany's new coalition wants to phase out coal by 2030, but bringing plans forward by eight years would require a new round of negotiations. , Bloomberg

European consumers are set for the highest energy bills on record as gas and oil prices surge again amid Russia’s invasion of Ukraine.

Based on current forward prices, the region’s total primary energy bill is now set to approach $1.2 trillion this year, Citigroup Inc. said in a report. That reflects Europe’s enduring reliance on imports to meet demand, with its swift expansion of renewable power so far causing little dent in that dependence.

The continent is “facing a big headwind from its energy bill,” analysts including Alastair Syme wrote in the report. Citi’s forecast is up almost $200 billion since its January prediction and surpasses the previous high in 2008.

With Europe relying on imports of gas and oil to cover more than half its energy needs, the supply crunch in recent months has driven up prices for everything from food to fuels. That has prompted governments across the region to pledge billions to cushion the blow for consumers. “But ultimately this pricing pressure will trickle through,” the analysts said.

After benchmark European gas futures retreated from record highs in December, renewed supply concerns have sent prices soaring again amid Russia’s assault on its neighbor. Brent crude also rose above $100 a barrel this week for the first time since 2014.

Europe’s energy bill came in at about $300 billion last year. With the predicted 2022 cost four times that amount, demand may swiftly fall away among “marginal” consumers, Citigroup said.