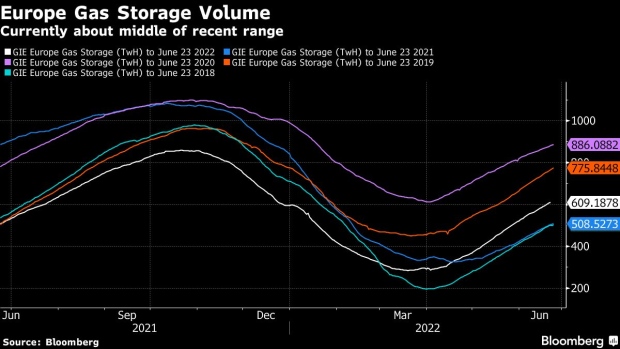 DUISBURG, GERMANY - MAY 02: A barge carrying coal travels up the Rhine river on May 02, 2022 in Duisburg, Germany. Germany, which previously counted on Russia for 50% of its bituminous coal imports, has reduced that portion to 8% in an effort to ween itself off Russian energy imports due to Russia's ongoing war in Ukraine. Germany also imports Russian oil and gas and is seeking to replace those with imports from other sources. (Photo by Andreas Rentz/Getty Images) , Photographer: Andreas Rentz/Getty Images Europe

(Bloomberg) -- It looks like only Goldilocks weather -- not too hot, not too cold -- for the next year can stop Europe entering a major energy crisis in the coming months.

For the summer, river levels are the major factor to watch. In France, low levels on the Meuse river can lead to curtailments of electricity production at the country’s largest nuclear power plant. The facility uses water from the river to cool reactors and is governed by the Meuse’s level.

In Germany, the Rhine is key. Part of the country’s energy plan is to bring coal-fired power plants back online. The fuel for those plants is carried in barges on the Rhine.

Right now, the river is at a very low level for this time of year. The key chokepoint at Kaub is currently at 117 centimeters (46 inches), well below the 150 centimeters that triggers a “low water” alert. A drop below 80 centimeters seriously curtails traffic and it becomes impassable at 40 centimeters.

Looking ahead to the winter months, the weather is obviously again key. Right now, Europe’s gas stockpiles are actually fairly average for this time of year.

The problem, and what caused Germany to trigger stage 2 of its three-stage emergency plan, is extreme uncertainty about future supply. Should Europe get a relatively mild winter, such as it had this year and in 2018 and 2019, the problems may be manageable. However, a more severe cold spell such as occurred in 2017 and 2020 would spell disaster for the region’s economy.

For European energy, it is critical more than ever for investors to keep a literal weather eye out. Either too much heat and too little rain now, or too much cold in winter, would spell disaster. With so many bears around, Goldilocks is the only hope.

This was a post on Bloomberg’s Markets Live blog. The observations are those of the blogger and not intended as investment advice. For more markets analysis, go to MLIV on the Bloomberg Terminal.