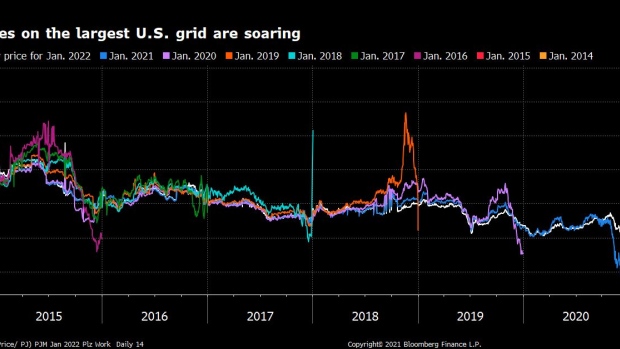 (Bloomberg) -- The price of electricity for the winter in the U.S. soared to a seven-year high in some markets, pushed up by a rally in natural gas that’s been exacerbated by energy-supply shortages gripping Europe.

Traders bid up the forward price of power in the biggest U.S. market to about $82 a megawatt-hour for January 2022, a level not seen for that month since 2014, according to data compiled by Bloomberg. The benchmark for 13 states stretching from Chicago to Washington eclipsed even the average price reached during the hot summer months this year, a rarity since U.S. power demand typically peaks when residents crank up air conditioners.

Higher gas prices mean more coal and even oil will be burned for power, driving up emissions just as the Biden administration steps up the fight against climate change. The surge also means people will see higher utility bills at a time when prices on a range of consumer goods are already rising.

“The era of cheap gas looks to be coming to an end,” said Michael Wara, director of the Climate and Energy Policy Program at Stanford University. One of the implications is higher electric power costs.

Record demand for gas from generators, along with exports to fuel-starved Europe and other regions, leave the U.S. heading into heating season with the lowest gas stockpiles since 2018.

Higher demand is coinciding with a second straight annual drop in gas production, helping to catapult gas prices above $5 per million British thermal units, more than double a low reached in January and the highest since early 2014.

Natural gas is the most-used power-plant fuel and drives prices in U.S. power markets, since the generators that burn it can turn on quickly to meet rising demand. More electric generators may be switching to coal, fuel oil and diesel this winter because of higher gas prices, said John Kilduff, founding partner of hedge fund Again Capital LLC.

Given the surge in gas prices from last year, “we would anticipate that some utilities are in fact going to be reflecting that cost into their end-users’ bills,” said Nina Fahy, head of North American gas for Energy Aspects. “It’s all going to depend on how cold it is and when the cold comes.”

Historically, the premiums seen in much of the U.S. right now are limited to New England and at times Southern California because of gas-supply constraints in those regions.

“All of the sudden we are seeing an expansion of the rings in the pond” into the mid-Atlantic and Midwest, said Teri Viswanath, lead economist for power, energy and water at CoBank ACB. “We are seeing a larger area where the market anticipates we are going to see higher prices this winter.”