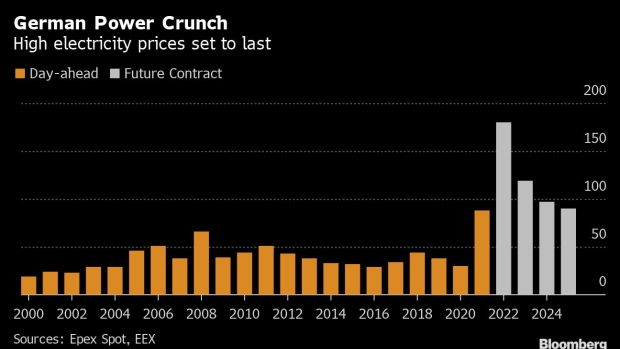 (Bloomberg) -- Europe’s energy crunch is set to last as electricity prices climb to a record, fueling inflation and raising bills to millions of households and industries from Germany to France and the U.K.

Power prices for delivery next year surged almost 11% in Germany and 7.7% in France as freezing weather forced European utilities to resort to burning more gas, coal and even oil to keep the lights on. High prices this month is spilling into futures contracts for the following years, a sign that the crunch could last longer than many expected.

The world is facing energy shortages as economies recover from the global pandemic, boosting demand. At the same time, supply hasn’t been able to keep up due to years of lower investments in fossil fuels. Europe’s wide network of renewable energy sources hasn’t kept up either as low wind speeds reduced output for most of the year.

German power for next year, a European benchmark, reached 184.30 euros a megawatt-hour, while the equivalent French contract surged to 211 euros. As utilities burn more fossil fuels, carbon prices also surged to a record 88.72 euros a metric tons, with options traders betting prices will exceed 100 euros before the end of the year.

Higher gas and power prices are boosting costs for consumers, already faced with higher costs for food and transport. The Bank of England’s Deputy Governor Ben Broadbent said this week that U.K. inflation may surpass 5% early next year. That could happen as energy regulator Ofgem allows utilities to raise prices to consumers again in April.

Europe has been shifting away from fossil fuels and even nuclear power in a bid to reduce emissions. That’s leaving the continent relying on renewable power such as wind and solar, which are intermittent sources.

The closure of conventional power plants that can be quickly turned on and off “is increasing the impact of renewable energy production on market pricing,” commodities trader Trafigura Group said in its annual report. “The structural shift away from coal and nuclear towards wind and solar is also causing severe strains in the power system.”