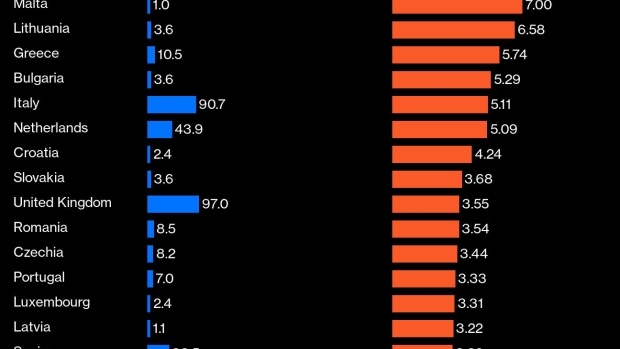 Heating network pipes in snow near the open cast lignite mine outside Belchatow, Poland, on Thursday, Nov. 24, 20212. Poland's use of coal makes it an outlier among the 27-member European Union, the country of 38 million people accounts for 77% of all the households in the bloc that still use coal for heating. , Bloomberg

(Bloomberg) -- Europe’s massive tab for securing energy supplies and cushioning consumers from price spikes soared past €700 billion this month, with countries stepping up their interventions in the face of plummeting temperatures.

Countries in the European Union have earmarked and allocated about €600 billion of support since September 2021 to shield consumers from soaring costs, according to the Brussels-based think tank Bruegel. That’s an increase of €50 billion from last month’s calculation.

Measures in the UK and Norway add €105 billion to that total as the region continues grappling with the fallout from Russia’s invasion of Ukraine.

The latest figures are bound to raise pressure on the EU to agree on a price cap for gas before Christmas. The discussions come as temperatures are set to be “unseasonably cold” across the northern part of the continent next week, according to forecaster Maxar.

The spend is almost equivalent to the EU’s landmark joint bond issuance program, launched to help cushion the region’s economy from the coronavirus pandemic. Bruegel called for the EU to set up a energy crisis fund to help combat the crisis and equalize the potential toll on nations’ bottom lines.

“As European energy prices are expected to remain higher for longer, fiscal sustainability concerns will increase, and governments will go under renewed pressure to become more targeted in the support they offer to families and businesses,” said Simone Tagliapietra, co-author of the report.

“This also highlights the risk of fragmentation for the European market, should fiscally stronger countries provide more support to their industries than others.”

Italy is responsible for the bulk of the increase since last month, with Prime Minister Giorgia Meloni’s government allocating two-thirds of its €30 billion budget for next year to providing relief for families and businesses facing high energy prices.

That adds to about €75 billion already spent to keep the economy afloat, with most of that targeted toward relief measures. Those include tax breaks for companies and families, and tax cuts meant to reduce pump prices for gasoline.

Energy ministers are set for the latest in a series of emergency meetings this month in a bid to sign off on a package of measures to curb the fallout from high natural gas prices. The package was put on hold as countries attempted to resolve a deep split over the level at which the price cap should be set.

Simultaneously, countries are grappling with a price cap on crude oil exports from Russia, which aims to keep flows coming from Moscow while also limiting its revenues.

--With assistance from Ewa Krukowska and Alessandra Migliaccio.