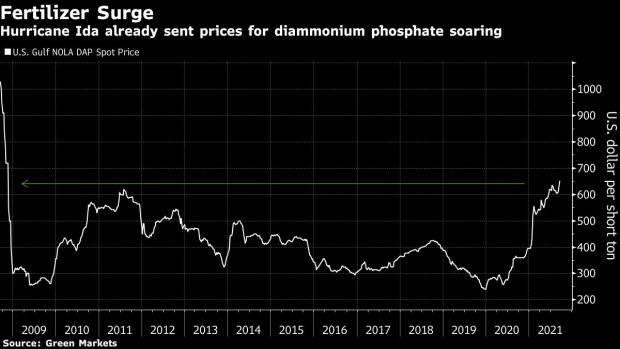 Europe’s energy crisis is spreading to the fertilizer industry, threatening to tighten food supplies and push prices even higher.

Norwegian fertilizer maker Yara International ASA on Friday said record-high gas prices are hurting its production, and will by next week have curtailed about 40% of its European ammonia output capacity. That comes after another producer, CF Industries Holdings Inc., said on Wednesday it’s halting two plants in the U.K. due to soaring energy costs.

Fertilizer prices jumped in the past year after a crop rally helped farmers boost purchases of the nutrient, and have been further supported after Hurricane Ida struck the heart of the U.S. fertilizer industry and Storm Nicholas threatened more damage in the Gulf of Mexico. Higher costs of the key farming input risk further exacerbating global food inflation at a time when hunger is on the rise.

A United Nations measure of global food prices is already near the highest in a decade. Costs jumped in the past year as extreme weather hurt crop prospects, the pandemic affected supply chains and shipping costs rose. That’s increased inflation risks for central banks and consumers, particularly those in poorer nations that are dependent on imports.

Yara trades about one-third of the world’s ammonia, which is used in fertilizers, but also relied on in industries such automotive, textile, healthcare and cosmetics. The company, which said it will curb output at a number of plants, produces ammonia in Europe at plants in the Netherlands, Germany, Norway, Italy, France, U.K. and Belgium.

A global gas shortage has more than tripled European prices this year, raising fears of a long-lasting impact on inflation and pain for the wider industry ramping up after the pandemic. Some of the region’s industrial giants, including BASF SE, are warning of the impact of the jump in electricity prices.