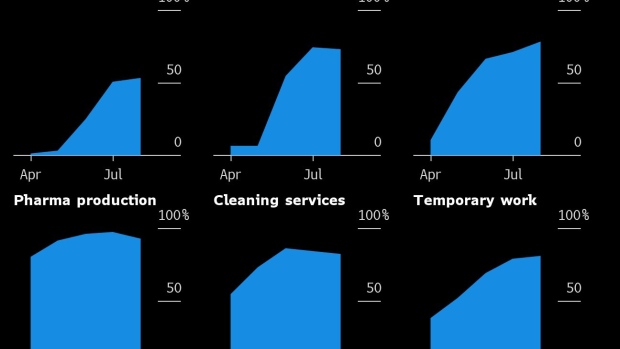 Visitors relax on the quayside as the sunsets at Le Vieux Port in Marseille, France, on Wednesday, Aug. 12, 2020. The French economy experienced its sharpest contraction on record in the second quarter when strict coronavirus lockdowns choked off manufacturing, tourism and consumer spending across Europe. Photographer: Jeremy Suyker/Bloomberg , Bloomberg

(Bloomberg) -- The relief as economic activity surged in Europe when coronavirus lockdowns ended is giving way to renewed gloom that suggests a full recovery is a long way off.

Hopes for a so-called V-shaped rebound have been dashed by indicators and high frequency data that show activity slowing markedly -- or even plateauing -- below pre-crisis levels.

A chief concern is that some countries may have to reinstate lockdown measures that crippled their economies in the first place. Virus counts are rising around the continent as people take advantage of the peak vacation season to travel and meet with friends and family.

“Output surged as lockdowns were lifted, but Europe’s recovery now looks to have halted between 5% and 10% short of normal. Social distancing rules, consumer caution and external demand have lowered the ceiling for the economy. Sadly, even that subdued level of activity may be incompatible with keeping the virus at bay.”

Even if people are moving about more, they aren’t shopping or eating out in the same numbers as before the crisis. And the hit to the tourism industry is expected to worsen as countries reimpose restrictions such as quarantines.

For many people, the worst of the economic crash is yet to come. Labor markets have so far been largely protected by massive government furlough programs and loans. As that support is phased out, unemployment is expected to rise significantly, delivering another shock to demand.

There are already warning signs -- the euro area lost 4.9 million jobs in the first half of the year, wiping out almost half the positions created since the last recession. The prospect of more job cuts hurts confidence, prompting consumers to save rather than spend.

The currency bloc’s economies will probably post impressive growth in the third quarter, but fall far short of making up the shortfall.

Even in Germany, where the virus death-toll was lower and the economic slump shallower, economists don’t expect a return to pre-crisis levels of output next year.

That means that instead of a V-shaped recovery, the shape of Europe’s economic outlook is more like a bird-wing, a term the Bank of France used in its forecasts.

It applies across all sectors, though some are faring more poorly than others. French hotels and restaurants, for example, are still reporting demand far below normal, while sectors such as car manufacturing and pharmaceuticals that quickly picked up are now plateauing and may even decline in August, according to the central bank’s survey.

Longer term expectations remain below pre-virus levels. The OECD’s Composite Leading Indicators for Europe, which tend to precede economic turning points by about six months, rebounded sharply in June but the pace slowed in July. The indicator reversed some of its gains.

The French government has set the objective of a getting economic output back to 2019 levels in 2022. But speaking at an event near the Spanish border on Thursday, the nation’s finance minister warned that could be derailed if the pandemic is allowed to gain ground because rules on social distancing and masks are ignored.

“The economic recovery is within reach -- it is gradual but real,” Bruno Le Maire said. “We have everything in place to recover in the coming two years, but we must all be responsible.”