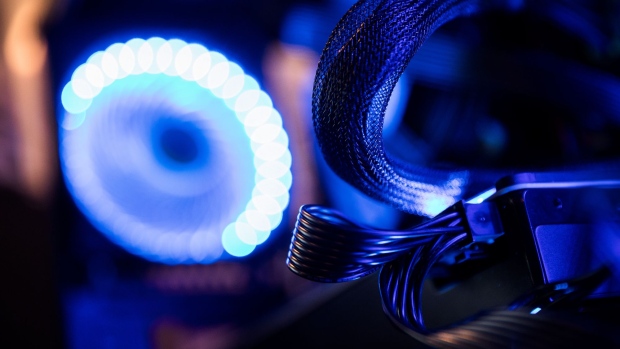 Lights illuminate graphic processing unit (GPU) cables inside a 'mining rig' computer, used to mine the Electroneum cryptocurrency, in Budapest, Hungary, on Wednesday, Jan. 31, 2018. Cryptocurrencies are not living up to their comparisons with gold as a store of value, tumbling Monday as an equities sell-off in Asia extended the biggest rout in global stocks in two years. Photographer: Akos Stiller/Bloomberg , Bloomberg

(Bloomberg) -- Europe’s fintech giants were built on the promise of new ways to do finance. Under pressure from rising interest rates and nervous investors, their next steps are looking more like tried-and-tested traditional banking.

“A lot of these businesses are expanding into different products and trying to cross-sell them to existing customers,” said Kilian Pender, a partner at Northzone, an early-stage investor in several fintechs including Klarna. “I think they will continue to do so, and with rates rising there is an opportunity here for them to seize.”

Record losses and a massive drop in tech valuations have pushed companies and their backers to do some soul searching. Adyen’s stock has fallen by roughly 40% in the past year — despite the firm being profitable — while US-based Stripe wrote down its value internally by 27% this summer, and Klarna completed a “down round” that saw its valuation plummet to $6.7 billion from $45.6 billion.

Many of these businesses thrived in easy funding conditions and pandemic-era consumer demand. A series of rate hikes and looming recessions later, the models are being tested like never before.

“There has been a tremendous reset of expectations and valuations and there are some natural repercussions for that,” said Luca Bocchio, a partner at venture capital firm Accel who specializes in fintech. “Some of the big names are quickly adapting themselves and expanding their product remit so that they can provide services across market cycles.”

The burgeoning buy-now-pay-later industry is perhaps facing the biggest challenge from a higher rate environment. These companies began by allowing customers to spread purchases over three or four installments with no interest, meaning they depend on fees paid instead by retailers.

But with borrowing rates rising sharply this year, companies in this sector are looking for ways to pass on their higher debt costs.

“This is something we are looking into — it has to be part of the conversation,” said Gil Danziger, co-founder and chief technology officer at Mondu, a BNPL platform for businesses. “The world is changing, and we have to change with it.”

To be sure, some fintechs are broadening their horizons in the opposite direction. Revolut, which is attempting to become a financial “super-app,” introduced a BNPL product in Ireland this year. It’s also planning to launch some form of faster mortgage process, boss Nik Storonsky said in November, while remaining committed to its crypto business, which has cratered along with the value of digital currencies this year.

Klarna, once Europe’s most valuable tech unicorn and the face of BNPL, has been exploring a few different products such as price comparison tools. It also announced a technology partnership with small business lender Krea in October, though Klarna has said it’s providing open banking services and not lending to businesses directly.

Business loans are an area of growth for payments firms such as Stripe and Adyen, which already have relationships with small companies through their merchant platforms. Adyen was granted a banking license in Europe in 2017 and in the US last year that will help it expand in this area. The Amsterdam-based fintech is also investing “heavily” in unified commerce and platforms, which will see Adyen launch its own terminal range for retailers.

“Obtaining a license is a hell of an investment, but in return we gain full control over the technology involved, and remove dependencies on third parties,” said Hemmo Bosscher, who leads platforms and financial services at Adyen. “Small business lending is a tremendously underserved segment that has been left behind by banks, and we can use technology to give out prequalified loans and eliminate human error.”

--With assistance from Aisha S Gani.