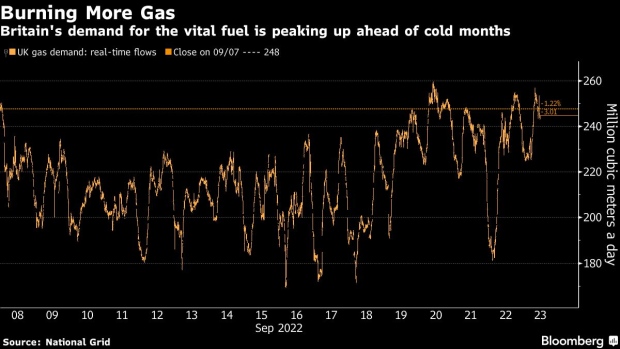 A radiator in the bedroom of a residential apartment in Corbera De Llobregat, Spain, on Wednesday, Jan. 12, 2022. Natural gas prices in Europe jumped to the highest level in a week as fears about a possible military action in Ukraine raise concerns that Russian supplies may get even more limited during the coming winter months. , Bloomberg

(Bloomberg) -- An Arctic chill that’s blowing across western Europe through next week will be the first test of how willing people are to delay switching on the heating in a bid to save energy and ease household budgets.

Grid operators are drawing up plans for how to ration energy if necessary this winter. With options maxed out to replace Russian supplies of natural gas, the onus is on reducing demand. Ideally, this is done voluntarily by consumers but if not, there are several steps a network company can take, the most of extreme of which is organized shutoffs.

“It will turn even colder early next week as a plunge of Arctic air surges southwards, and a strong northerly wind will accentuate the chilly feel,” according to the UK’s Met Office.

The heating season doesn’t officially start until October when temperatures are set to return to normal but it’s a reality-check for the region’s energy-consumption discipline as governments try to cut energy use from all corners of the economy. The European Union is discussing a mandatory power reduction target.

While governments are releasing billions of euros to support consumers struggling with surging energy costs, the hope is that many people will keep their thermostats turned down even in colder months.

“Some signs of demand reduction from households due to surging retail tariffs are emerging,” said EnergyScan, the market analysis platform of Engie SA. “But this has yet to be confirmed in the coming weeks.”

With many people back in the office, energy demand should peak in the early morning and late afternoon hours, especially with more lights being turned on as the days get shorter.

In Britain, there are signs that early-morning gas demand is increasing already this week, data from network operator National Grid Plc show. Wind generation has also been low, highlighting how still weather combined with cold temperatures could be tricky this winter.

Normal temperatures are set to return by the start of October when wind generation will increase too.

Goodbye Hot Showers. Here’s How Europe Is Slashing Energy Use