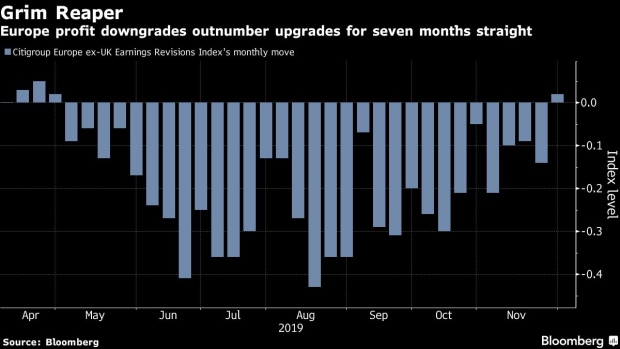 A cyclist and pedestrians pass over a bridge spanning the River Main as skyscrapers stand beyond in Frankfurt, Germany, on Wednesday, April 25, 2018. About 8,000 additional jobs may be created in Frankfurt’s banking industry, a statement from the Government of Hesse state says, citing estimates by Helaba Research. Photographer: Krisztian Bocsi/Bloomberg , Bloomberg

(Bloomberg) -- European equities are set for their best year in a decade and a growing chorus of brokers is betting the market can outdo its more popular U.S. peer in 2020. Many investors aren’t buying it.

There are plenty of reasons to be optimistic: A lot of fund managers missed out on a surprisingly strong rally that added about $2 trillion to European stocks this year, leaving ample room for new buyers. And the market is trading at a near-record discount to the U.S. at a time when the likes of JPMorgan Chase & Co. are touting it in a bet on an economic recovery.

But just as the club of European stock fans kept expanding, Monday delivered a reminder of the region’s vulnerability as both the Stoxx Europe 600 Index and Germany’s DAX Index underperformed the S&P 500 Index on weak U.S. manufacturing data and German political uncertainty. And in a triple whammy, President Donald Trump on Tuesday signaled he’s willing to wait another year to strike a trade agreement with China.

The European market’s success in 2020 hinges on numerous moving parts, including the U.K.’s ability to complete Brexit, the state of the German economy, the strength of corporate earnings and manufacturing as well as the outcome of U.S. elections and trade talks with China. This is making the likes of Aberdeen Standard Investments prefer U.S. stocks.

“Although valuations are preferable for European equities, we are less convinced that European firms will be able to deliver as strong a recovery in company profits after the slowdown in 2019,” said Andrew Milligan, head of global strategy at Aberdeen Standard. “While U.S. presidential politics will undoubtedly be a factor in encouraging or discouraging capital flows into the U.S. during 2020, the euro zone also faces its own political headwinds.”

The Stoxx 600 fell again on Tuesday, losing as much as 1%. The U.K.’s FTSE 100 Index underperformed other benchmarks with a slump of 1.9%, led by oil majors BP Plc and Royal Dutch Shell Plc as crude prices dropped and the pound strengthened.

While the U.S. is preparing for an exciting election cycle in 2020, which many strategists expect will boost volatility and lead to weaker stock market returns, nothing compares with the headache of navigating European politics.

German Chancellor Angela Merkel’s ruling coalition suffered a blow with the election of government skeptics as co-leaders of Germany’s Social Democrats at the weekend. A collapse of the coalition would end Merkel’s political career, though the Social Democrats at a conference later this week may choose to negotiate a way forward with Merkel’s CDU-led bloc.

The Brexit drama is also far from over. Even if the Tories manage to win a majority during the Dec. 12 election, the negotiation over the terms of the U.K.’s exit from the European Union is likely to take some time.

Even though the days of double-digit earnings growth in the U.S. are in the past, it’s still outpacing Europe. Next year, analysts see profits for companies in the Stoxx 600 climbing 8.9% compared to 9.2% for those in the S&P 500, according to data compiled by Bloomberg.

Analyst earnings downgrades for Europe excluding the U.K. have been outpacing upgrades since April until they turned flat at the end of November. This has allowed many companies to beat expectations during the latest reporting season, though the consumer-goods, banking and oil sectors delivered somber warnings.

Over at UBS Global Wealth Management, the tepid profit growth outlook is the reason the asset manager prefers U.S. equities to Europe.

“The U.S. profit cycle feels long in the tooth but we still see that a mix of better revenue growth and higher and more sustainable margins than in the euro zone and greater volumes of share buybacks are likely going to mean that U.S. earnings growth is going to outperform euro-zone earnings growth,” said Maximilian Kunkel, chief investment officer for Germany at UBS Global Wealth Management.

Tuesday brought a fresh stream of macro data that underscored vulnerabilities on both sides of the Atlantic. Equities slumped after a measure of U.S. manufacturing late Monday contracted against a backdrop of weaker orders and subdued production, showing how sensitive Europe remains to the situation in the U.S.

In Germany, factory manufacturing data beat expectations but was far from suggesting a strong rebound in growth. The economy still faces obstacles, particularly in the auto industry, and employment in manufacturing continues to fall.

Despite all these concerns, some investors say European stocks offer an attractive discount to the U.S., especially relative to the negative returns on cash and fixed income.

(Updates with markets in the sixth paragraph)

--With assistance from Sid Verma.

To contact the editors responsible for this story: Blaise Robinson at brobinson58@bloomberg.net, Phil Serafino, Jon Menon