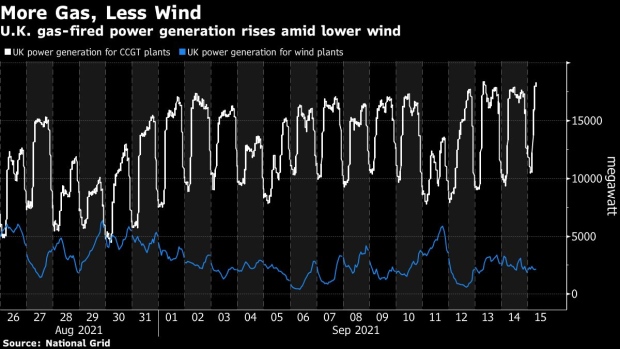 (Bloomberg) -- Natural gas prices in Europe continued their record-breaking run as uncertainties about supply security this winter worsen. Power prices also surged to a new high amid low wind and a disruption at Britain’s interconnectors.

The latest concern for the European market is tropical Depression Nicholas, which threatens to lash the U.S. Gulf Coast with rain for days and has already affected one facility that produces liquefied natural gas for exports. Uncertainties over Russia’s ability to supply the region when it also risks a domestic gas crunch are also increasing among traders just as temperatures below normal are forecast for the next two weeks.

In the U.K., low wind output has also increased demand for gas to produce power. Wind generation only accounted for 7.4% of supplies on Wednesday, while gas made up as much as 64% of the U.K. total, according to National Grid Plc. Potential for wind is seen low for the U.K., Germany and Spain for the rest of the week according to a note from forecaster The Weather Co.

German electricity for next year jumped as much as 4.9% to 104.70 euros per megawatt-hour.

Tropical storm Nicholas has already led to the shutdown of all three production units at Freeport LNG in Texas with power issues expected to be the cause.

Meanwhile, power flows were halted between the U.K. and Ireland on the Moyle and East-West interconnectors, according to Elexon’s remit website. A fire has broken out at electricity converter station at Sellindge in the U.K.

For gas markets, the focus has shifted to Russian supply. Traders are not convinced of extra deliveries from the biggest supplier even after flows via a key link to Germany have recovered, and are now eyeing upcoming auctions for additional transport capacity to Europe in October.

“Despite Russian flows via the Polish-German border at Mallnow showing improvement, overall Russian flows and the ability to increase those further remain uncertain,” Energi Danmark wrote in a note. “Demand is still very high in both Asia and in Europe as low storage levels remain. Without further clarity on Russia’s supply situation, the market is in for more upside today.”