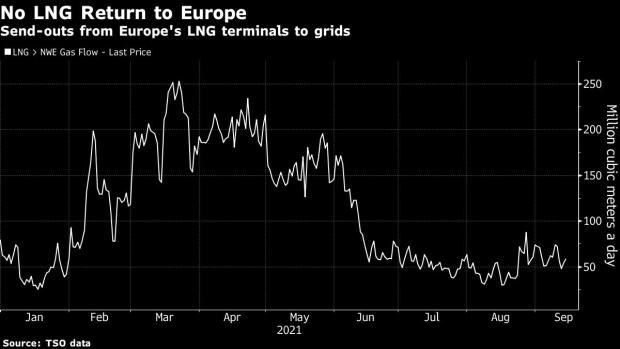 Natural gas prices in Europe resumed gains after a breather on Thursday, with no signs of improved supplies ahead of the winter.

The almost non-stop rally is prompting energy-intensive industries to curb consumption at a time when economies recover from the impact of the pandemic.

Flows to U.S. LNG export plants languished at the lowest since June after the Freeport facility in Texas was shut by Storm Nicholas earlier this week. The producer has declared force majeure on shipments of the fuel, according to people with knowledge of the matter.

Prices could remain high for weeks to come, the International Energy Agency Executive Director Fatih Birol, said in a Bloomberg TV interview, while a former chief of U.K. energy regulator Ofgem said households will inevitably see their gas and electricity bills increased over a six-month period.

Benchmark European gas prices traded in the Netherlands gained 4% to 65.80 euros a megawatt-hour by 9:32 a.m. in Amsterdam. Prices lost almost 11% on Thursday after gaining as much as 21% a day earlier.

Europe is facing energy shortages, with Goldman Sachs Group Inc. warning that the region’s industrial users will need to curb consumption. Inventories are at their lowest seasonal level in more than a decade and the heating season starts in about a month.

Traders are focusing on monthly capacity auctions for transport of gas via Poland and Ukraine on Monday. Extra gas coming from Russia in October would help relieve the market tightness.