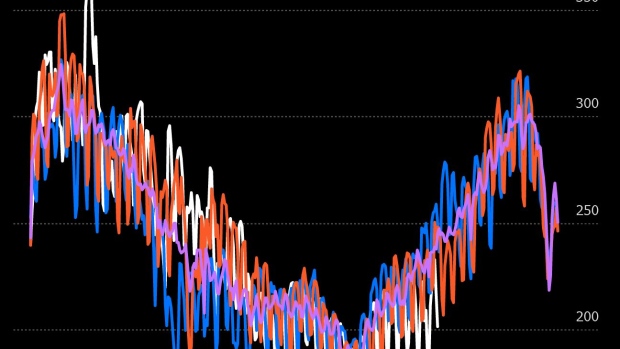 (Bloomberg) -- Europe’s industrial producers like BASF SE and Yara International ASA so far have managed to pass on soaring energy costs to customers, shielding their profits. There’s a risk to that strategy: They could wipe out future sales.

Most of the region’s energy-intensive firms have either hedged against record electricity and gas prices or are getting customers to cover to higher costs. While that’s likely to see limited fallout for a slew of third-quarter company earnings due over the next two weeks, the question is how much longer buyers of chemicals, paper and metals products are willing to swallow price hikes.

“The biggest risk ahead is of demand destruction given the inflation wave passing through to the end consumer,” said Peter Clark, a chemicals analyst at Societe Generale SA. Cratering sales could weigh on companies’ pricing power and profit margins next year, he said.

Power and gas prices have been fluctuating wildly this month, a squeeze that’s expected to intensify as winter approaches. The surge threatens to put the brakes on an economic rebound by jacking up business costs and household energy bills, sending inflation to multi-year highs.

While the energy crisis took hold only late in the third quarter, some companies are already feeling the pinch.

Norway’s Yara, which makes nutrients for fertilizer and is due to report third-quarter results on Wednesday, has cut some 40% of its European ammonia output due to rising natural gas prices.

Some customers are already dialing back on orders. A Norwegian farming cooperative has temporarily stopped selling mineral fertilizer to its members due to a surge in costs.

“The fluctuations from day to day can be far greater than our margin on fertilizers and it currently isn’t possible to get binding prices from suppliers,” the cooperative said Friday, adding that it had gotten assurances from Yara for next year’s supplies.

Like Yara, Europe’s biggest chemicals producer also cut ammonia output at the end of last month. Its Ludwigshafen facility uses 6 terawatt hours of electricity annually, equivalent to the energy contained in about 3.5 million barrels of crude oil. The good news is that the company’s other product lines - petrochemicals and polyamides used in textiles -- are benefiting from a surge in chemical prices.

“High energy costs are a negative, but should not be viewed in isolation,” David Varga, an analyst at Bankhaus Metzler, said ahead of the company’s earnings on Oct. 27. “Generally, I see BASF as a good pick in an inflationary environment.”

Saint-Gobain expects the energy crisis to add 1.1 billion euros ($1.3 billion) in cost in the second half of the year. The French construction materials maker, which reports results on Oct. 28, will offset this by charging more for products including plaster, roofing and insulation materials. It’s sticking to full-year financial targets for a “very strong” rise in operating income.

While large listed firms like BASF seem well-protected to ward off the energy crisis -- in part because they have longer-term energy-purchasing agreements or even produce electricity and heat themselves -- the disruption is set to be more acute for smaller, family-owned businesses.

Swedish paper manufacturer Klippans Bruk AB will cut almost a third of its 78 staff and dial down production, owner and chief executive officer Olle Grundberg said Friday in an interview. The company will now start negotiations with its union over the redundancies because it hasn’t been able to pass on surging energy costs to its customers.