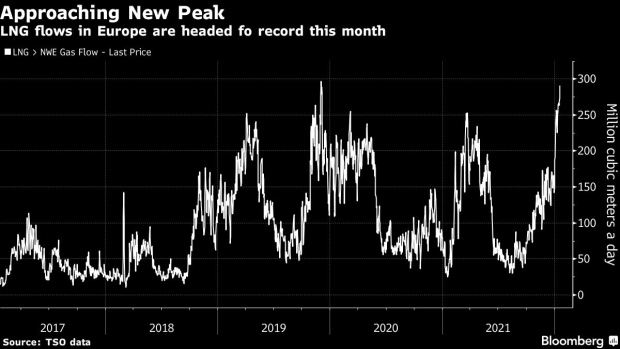 (Bloomberg) -- There is so much liquefied natural gas arriving in Europe that cargoes of the super-chilled fuel are being offered at a discount to regional benchmark rates.

Europe’s LNG imports are approaching record levels this month, prompting traders to cut cargo prices due to the lack of slots at import terminals and as supply exceeds demand. Fuel for delivery in March is being offered at $2 per million British thermal units, or 8%, below prices on the Title Transfer Facility gas trading hub in the Netherlands, said Melissa Lindsay, founder of LNG brokerage Emstream.

The discounting is a turnaround from a few months ago, when LNG imports commanded a premium amid concerns of a winter fuel shortage. Benchmark gas futures have since plummeted from a record high in December as LNG arrivals increased and China, the biggest buyer of the fuel, offered to sell dozens of cargoes this year.

The discounting situation is not new, although after European gas prices more than tripled over the past year, the magnitude of the reductions is deeper. During a wave of LNG imports in late 2019, shipments were priced at a discount as traders struggled to find demand for cargoes in northwest Europe.

The wave of LNG is likely to continue as prices make U.S. exports more profitable to Europe rather than in Asia in March, April and May, according to BloombergNEF.