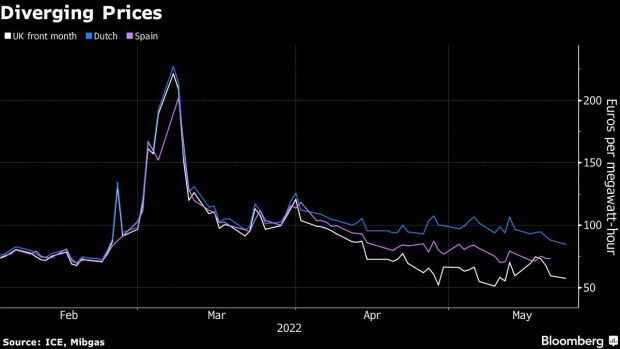 (Bloomberg) -- Europe’s ambitious plan to walk away from Russian natural gas and replace a chunk of it with tanker-borne imports faces a major obstacle: getting it to where it’s needed most without huge price discrepancies.

Even as record amounts of liquefied natural gas land on Europe’s shores, the lack of interconnectors from key import terminals in the west means gas can’t easily reach countries in the east that are more reliant on pipeline supplies from Russia.

As a result, short-term gas prices in Britain, France and Spain have tumbled to as little as a third of those in markets including the Netherlands and Germany, according to Citigroup Inc. Such discrepancies, particularly to the Dutch trading hub where Europe’s benchmark rates are set, are making it harder to trade the fuel and likely to keep prices volatile until supply choke points are resolved.

“There is infrastructure missing for the west-to-east flows,” said Marco Saalfrank, head of continental Europe merchant trading at Axpo Solutions AG in Baden, Switzerland. “So LNG, in short, is not the only solution to replace Russian gas because of the bottlenecks.”

The price divergence and infrastructure constraints highlight that the European Union’s target to replace as much as third of Russian gas with LNG in the short term won’t be easy.

Some solutions are emerging to connect LNG tankers with local gas networks.

At least eight ship-borne LNG terminals known as floating storage and regasification units, or FSRUs, have been announced over the past three months from the Netherlands to Germany and Estonia. But while some can be installed as soon as next winter, they’re only good when connected to existing grids and backed up by agreements for round-the-clock supply.

“FSRUs are a quick way if there is relevant grid connection, but still there are bottlenecks where they can be placed,” said Gyorgy Vargha, chief executive officer of MET International AG, an energy trading firm based in Zug, Switzerland. “FSRUs alone won’t necessarily solve the problem. To guarantee security of supply you need long-term LNG contracts to ensure baseload supplies.”

Still, the question is how to supply nations such as Hungary and Bulgaria, where there’s no access for large LNG vessels. One option is to adapt existing pipeline infrastructure.

For its part, Europe is looking into how to reverse flows on the Trans-Adriatic Pipeline, or TAP, so that gas can travel from Italy to Greece, Axpo’s Saalfrank said. TAP currently brings gas east to west from Azerbaijan through southeastern Europe and into Italy, and capacity in the other direction would help diversify supplies in Europe.

Even if Europe bets big on LNG, the super-chilled fuel has to come from somewhere. New production plants won’t start delivering more supplies before about 2025. Competition for available fuel will remain tight in the next three years, keeping prices high, Axpo said.

“Using all LNG capacity to the max will put a huge strain on the LNG supply,” MET’s Vargha said. “There isn’t enough LNG capacity in the world to avoid demand destruction in a no-Russian-gas scenario.”