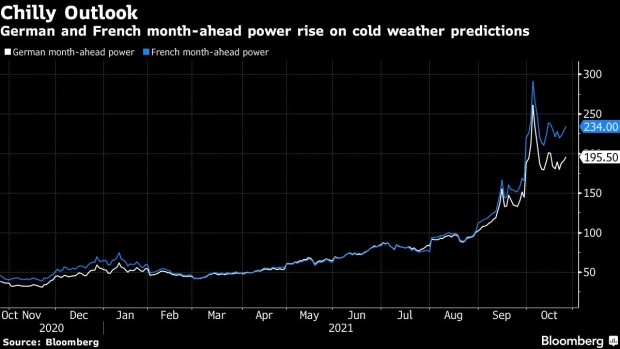 The costs of powering Europe’s homes and businesses in November are increasing as the onset of cold weather feeds expectations that pricey sources of energy, such as gas and coal, will have to get the continent through the month.

Mainland Western Europe’s weather will turn cooler next week, according to two reports Tuesday. Higher-than-normal temperatures are forecast in eastern Europe, Weather Co. said in a report on Bloomberg.

The increases in power prices is driven partly by “a drop in the expected temperatures for the coming weeks,” according to a note by analysts at Alfa Energy Ltd. They’re also strengthened by the “dwindling volumes” of gas coming through Yamal in Siberia, the note said.

Trading volumes in German next-year contracts also fell Monday to their lowest level since the end of May as market volatility took its toll on traders. As few as 163 megawatts were traded, compared with more than 1,600 megawatts early in October, according to exchange data on Bloomberg.