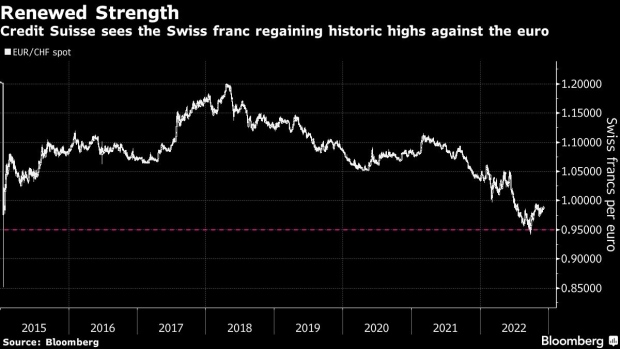 (Bloomberg) -- The Swiss franc is likely to strengthen further early next year as investor concerns about the euro area’s faltering economy and debt levels will fuel haven flows into the currency, according to Credit Suisse Group AG’s head of foreign-exchange strategy.

Luca Bindelli sees the Swiss franc strengthening nearly 1% in coming months to 95 centimes per euro, the strongest level since a seven-year high hit in September. That would add to gains this year that have made it the top performer in the Group-of-10 against the common currency, apart from the dollar.

The Swiss National Bank has allowed the currency to strengthen as part of its tightening of financial conditions in response to higher inflation. That’s been a seismic shift from years of attempting to weaken the franc to support the economy.

The SNB’s policy of issuing short-term bills to soak up cash sloshing around the financial system could also prove to be supportive for the currency, said Bindelli, who also heads global fixed income strategy. The SNB issues these securities to counter the money-market impact of reducing the amount of interest-earning deposits that commercial lenders can park at the central bank.

“SNB bills may become attractive to foreign investors, creating a secondary market, with these inflows probably contributing to the strengthening of the Swiss franc,” said Bindelli. “That should be welcomed by the SNB given the inflationary environment.”

Still, Bindelli sees it unlikely that the SNB will need to step up support of the franc with large foreign-currency sales in the near future, which would unwind a balance sheet bloated by years of currency interventions. SNB governing board members Andrea Maechler and Martin Schlegel recently signaled a balance sheet reduction is currently not on the table.

Instead, the SNB is likely to draw out more liquidity by further lowering the threshold at which interest on deposits of commercial banks is paid at its key rate, according to Bindelli. The aim would be to ensure money market rates are increasing in line with the SNB’s interest-rate hikes.

“The SNB will likely withdraw liquidity by lowering the threshold,” said Bindelli, potentially as soon as next week’s meeting. “This is not outright balance sheet reduction but will come alongside liquidity-absorbing measures.”

Other central banks have faced similar challenges, with the European Central Bank and the Bank of England experiencing rates in repo markets lagging increases in their deposit rates.

Once the ECB finishes its hiking cycle, Bindelli sees the franc slipping back to around 97 centimes per euro in a year’s time.