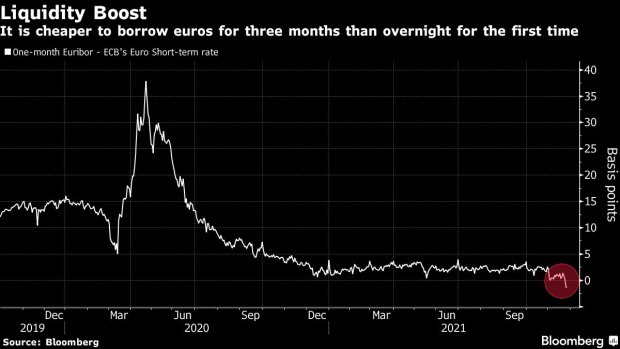 Banks in the euro zone are paying more to borrow funds overnight than for three-months amid a record cash glut that is distorting money markets in the region.

For the first time on Wednesday, the European Central Bank’s euro short-term rate, which reflects wholesale funding costs for one day, climbed above three-month Euribor, a benchmark based on the average rate that large banks can theoretically lend to one another.

It comes as the ECB’s bond-buying program and ultra-cheap loans boosted the amount of spare cash in the economy to 4.5 trillion euros ($5.1 trillion) earlier this month. That’s exacerbating a shortage of collateral before year-end, when banks tend to tweak their balance sheets by parking cash in liquid instruments like German bills.

The rebalancing has pushed down the rate on short-dated German paper, dragging unsecured rates such as Euribor lower. Under normal economic conditions, longer-term funding is more expensive than short-term borrowing because there’s a higher risk the money will not get paid back.