Europe’s post-lockdown economic surge strengthened in July, but businesses warned of threats to the outlook in the form of shortages of raw materials, delivery delays and rising costs.

IHS Markit monthly measure of private-sector activity in the euro area jumped to 60.6 from 59.5 in June, the highest in more than two decades. Employment also rose, according to the survey.

The improvement in the rate of activity was due entirely to the services sector though. Manufacturing output dropped, with many firms blaming delivery logjams and supply-chain issues that held up production. 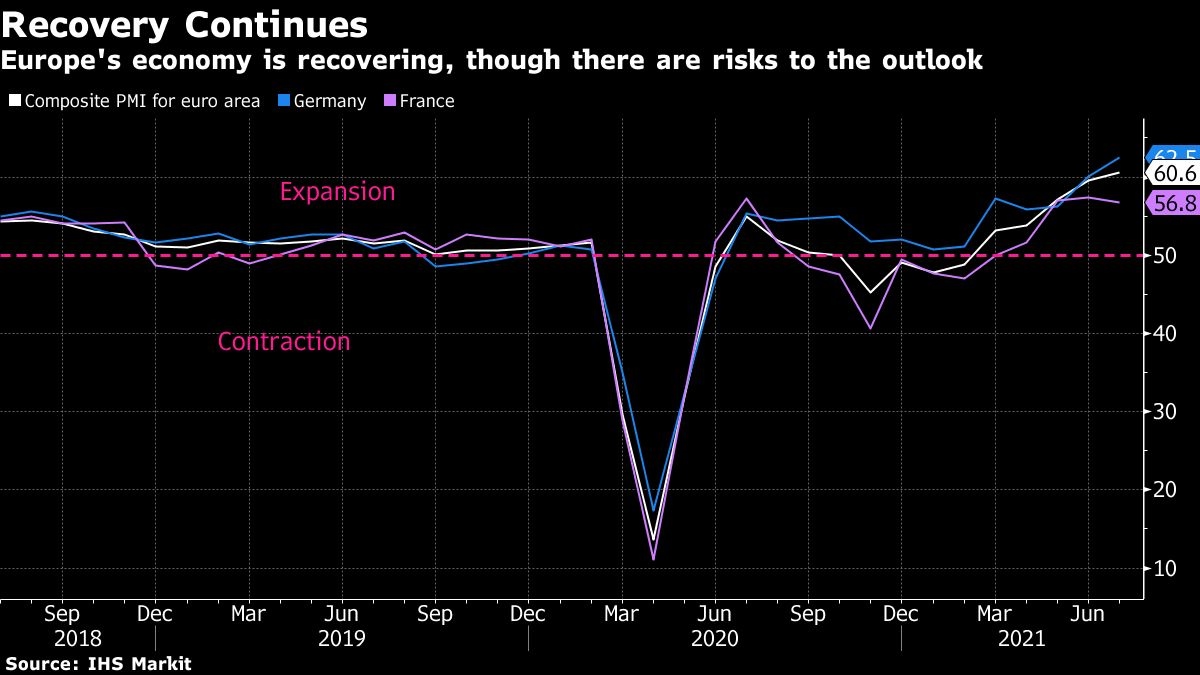 Supply disruption has been one of the dominant stories of the year amid a demand surge as economies bounced back from pandemic restrictions. The scramble to ramp up production after the recession in 2020 has led to shortages across multiple industries, with semiconductors among the most high-profile examples.

The squeeze is feeding into higher costs for businesses, which many are passing on to customers. Selling prices rose at a near-record pace in July, which may further fuel concerns about inflation in the region getting out of control.

The other risk to the outlook is the virus as the delta variant pushes up the number of new cases across the continent. Business confidence in the Markit survey declined in July, with the latest surge in infections blamed.

European Central Bank President Christine Lagarde said Thursday that the pandemic “continues to cast a shadow” on the economy. She also noted that bottlenecks are holding back production and said there is “a long way to go before the damage to the economy caused by the pandemic is offset.”

She spoke after a policy meeting at which the ECB reinforced its pledge to keep pumping in monetary stimulus, promising not to withdraw support prematurely.

In a separate survey of non-financial businesses published by the ECB on Friday, respondents also reported “buoyant demand,” with production constrained by shortages of materials and components. They reported “sharply higher” input prices, though expect wage pressures to remain moderate.