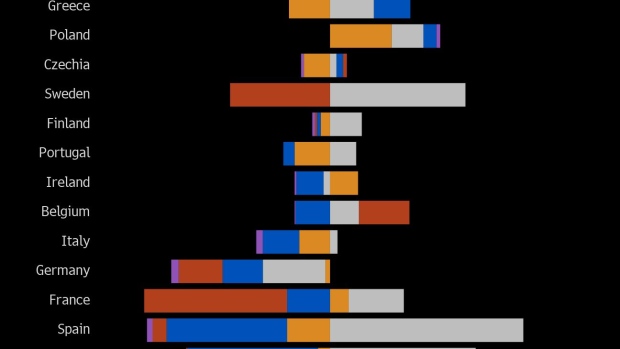 Wind turbines at a wind farm during sunset in Nauen Brandenburg, Germany, on Wednesday, Dec. 30, 2020. It was a pivotal year in the transition toward renewable energy, underpinned by massive government spending pledges and corporations working to burnish their environmental, social and governance credentials. , Bloomberg

Renewables growth has helped reduce the EU’s dependence on gas, which has soared in price since the middle of last year as the region grapples with a supply crisis that’s dealt blows to industries as well as ordinary consumers’ pockets. More than half of new renewable generation since 2019 has replaced gas power, according to a study by London-based climate think tank Ember, with the rest replacing mainly nuclear and coal sources.

“These are moments and paradigm shifts when governments and businesses start taking this much more seriously,” said Charles Moore, the lead author on the study. “The alternatives are available, they are cheaper, and they are likely to get even cheaper and more competitive. Renewables are now an opportunity, not a cost.”

The high price of gas relative to coal has meant utilities are leaning more on coal as a back-up for renewable generation, which risks the trajectory of Europe’s phase-out of the dirtiest fossil fuel. Last year, the EU’s coal use jumped disproportionately high relative to the rise in power generation as high gas prices boosted the relative profitability of burning coal instead.

EU power generation from renewables reached a record high in 2021 of 547 terawatt-hours last year, accounting for an 11% increase compared to two years before, according to Ember’s Europe Electricity Review. It’s more than doubled in a decade, representing a 157% increase since 2011.

Gas use declined last year for the second year in a row, reaching a level 8.1% lower than 2019. By contrast, coal use fell just 3.3% in the same period. Put simply, wind and solar did a great job of replacing coal during 2011-2019 but since then renewables have mostly been nudging out gas-fired power stations.

Ember’s Moore warned that the slowing phase-out of coal might require legislation to accelerate. The International Energy Agency recommends OECD countries cease using coal by the end of the decade to ensure alignment with the Paris Agreement target of keeping the world’s temperature increase below 1.5 Celsius.

“Europe can accelerate the phasing out of coal by building more renewable energy and faster,” said Felicia Aminoff,  an energy-transition analyst at BloombergNEF. “Wind and solar have no fuel costs, so as soon as you have made the initial investments to build wind and solar capacity it will start replacing generation that uses any kind of fuel, whether it is coal or gas.”

Overall, EU power sector emissions fell at less than half the rate required to hit that target, Ember’s report said. Spain produced the largest emissions reduction in the last two years, with renewables adding about 25 TWh and gas falling 15 TWh. In contrast, heavy use of coal dragged down the bloc’s climate progress in Poland, where coal use rose about 8 TWh and renewables gained only 4 TWh.