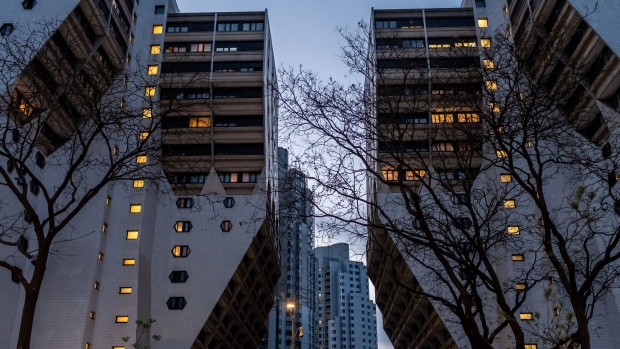 Illuminated apartments in residential tower blocks in the Flandres neighborhood in the 19th arrondissement of Paris, France, on Monday, April 18, 2020. While energy costs began rising last year, Russia’s invasion of Ukraine has pushed them to the top of the political agenda as prices broke records and those increases represent more than half of Europe’s inflation, costing households across the continent some 230 billion euros ($251 billion) this year. , Bloomberg

(Bloomberg) -- The scale of the increase in consumer energy bills will compel governments to lift pressure on households and raises the likelihood of windfall taxes, according to analysts at Citigroup Global Markets Inc.

A utility bill rise of over 3% of GDP is expected in Europe in the next couple of years as commodity prices peak, analysts Piotr Dzieciolowski, Jenny Ping and Antonella Bianchessi wrote in a note Monday.

Soaring energy prices are adding to the cost of living for households across Europe, where inflation is pushing into double digits for some groups. Iberian governments have approved a price cap on energy costs, while the UK has been considering a windfall tax on utilities to help alleviate the strain on households.

Power and gas bills are likely to increase in Europe from around 3.5% of household disposable income in 2021 to 4.5% in 2023 and 4.8% in 2024, they estimated. The biggest problem could be seen in Eastern Europe, where commodity prices constitute a larger proportion of bill costs, they said.

Bad debt is a growing concern, particularly for utilities like E.ON SE and Enel SpA who get a large proportion of their earnings from their supply business, the analysts said.

Consumers in Italy were most likely to have delayed payment of their utility bills in the past year, according to a Citi survey, while a quarter of respondents across Europe aged 18 to 29 said they wouldn’t be able to pay their bills on time if they rose by a tenth.