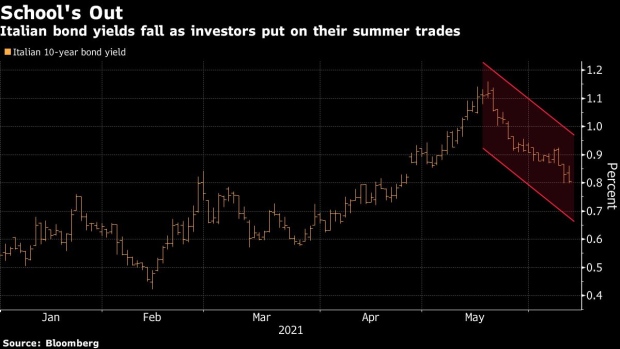 Christine Lagarde, president of the European Central Bank (ECB), addresses the European Parliament in Brussels, Belgium, on Monday, Feb. 8, 2021. Lagarde predicted the euro-area recovery will pick up in the summer, while stressing that public authorities will have a difficult job weaning the economy off of emergency support. , Bloomberg

(Bloomberg) -- European Central Bank President Christine Lagarde is giving investors the green light to load up on some of the highest-yielding government bonds in the region over the coming months.

By signaling that there would be no let-up in the ECB’s pandemic debt-buying program on Thursday, she helped put aside fears that the central bank is preparing to withdraw unprecedented monetary support -- at least until September.

Her pledge -- to keep bond purchases at a “significantly higher” pace than in the first months of 2021 -- spurred a rally in Italian and Greek securities, among the region’s riskiest, and the trade of choice for investors looking to coast on the extraordinary stimulus for a while longer.

These so-called carry trades are a staple for money managers looking to buy and hold the securities to pocket the extra return, banking on the fact that policy makers will keep borrowing costs in check. And they’re particularity popular when there’s less risk for volatility, which only underscores the room for a rally now that the ECB has made its backstop so explicit.

“The ECB has done whatever they can to influence bond markets for a calm summer,” said Piet Christiansen, chief strategist at Danske Bank A/S.

At over over 100 basis points, the extra yield on Italian and Greek 10-year debt over equivalent German bunds is almost triple the average across other eurozone peers.

German bond holders would have made a loss of nearly 1% over the past year, while those holding Italian or Greek debt would have netted returns of over 6%, according to Bloomberg Barclays indexes.

“The ECB’s finger is nowhere near the trigger,” said Vuk Magdelinic, chief executive officer of fixed income analytics firm Overbond. “In fact, the safety catch is still firmly on and there’s still no sign of it changing course.”

The ECB’s next policy meeting is on July 22, but the Sept. 9 session is the most likely one for any shift. The Governing Council will have another round of updated economic projections to consider, the European Union should be close to its vaccination target, and the disbursements under the bloc’s recovery fund should have started.

That could make for a more heated debate over the pace of emergency bond buying, and potentially encourage more-hawkish policy makers to try to start talks on how to phase out the program. The current end-date is set at March 2022.

Until then though, the region’s bond markets can rely the ECB’s purchases. That’s a windfall for countries like Italy, where the debt load has spiraled toward 160% of economic output amid the coronavirus pandemic, yet has seen bond yields plummet to record lows regardless.

“The ECB was wanted to avoid the impression that securities purchases could be scaled back, i.e. that the monetary policy stance could become less expansionary,” said Joerg Angele, senior economist of Bantleon Bank AG.

Italian bonds reversed early losses to rally for a third day. Greek bonds also advanced, with the 30-year yield sliding to an all-time low. The euro was broadly steady with currency markets largely reacting to a faster-than-expected pickup in U.S. consumer prices.

Traders in money markets aren’t pricing in any rate hike from the current record-low of minus 0.5% until 2023 at the earliest, with only around one basis point of decreases priced in over the next year.

“It does set us up for a more hawkish turn, come September,” said Jacqui Douglas, chief European macro strategist for TD Securities in London. “The doves have won the summer.”