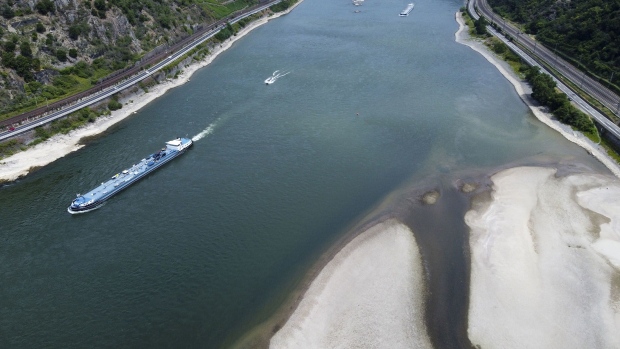 (Bloomberg) -- In the midst of an arid summer that set heat records across Europe, the continent’s rivers are evaporating.

The Rhine — a pillar of the German, Dutch and Swiss economies for centuries — is set to become virtually impassable at a key waypoint later this week, stymieing vast flows of diesel and coal. The Danube, which snakes its way 1,800 miles through central Europe to the Black Sea, is gummed up too, hampering grain and other trade.

Across Europe, transport is just one of the elements of river-based commerce that’s been upended by climate change. France’s power crisis has worsened because the Rhone and Garonne are too warm to effectively cool nuclear reactors, and Italy’s Po is too low to water rice fields and sustain clams for “pasta alle vongole.”

While disruptions to waterways would be a challenge at the best of times, the region is already on the brink of recession as Russia’s invasion fuels inflation by squeezing food and energy supplies. The situation — just four years after a historic halt to Rhine shipping — adds urgency to European Union efforts to make inland shipping more resilient.

The continent’s rivers and canals convey more than 1 ton of freight annually for each EU resident and contribute around $80 billion to the region’s economy just as a mode of transport, according to calculations based on Eurostat figures. But the fallout from dried-up waterways goes deeper.

“It’s not just about commercial navigation. It’s about freshening up when it’s hot, it’s about irrigating and so many other things,” said Cecile Azevard, director at French water operator VNF. “Rivers are part of our heritage.”

The poor conditions are expected to drag down the region’s economies far worse than the 5 billion-euro ($5.1 billion) hit caused by Rhine transit issues in 2018, according to Albert Jan Swart, a transportation economist at ABN Amro Bank NV.

“The capacity for inland shipping is going to be severely limited as long as there’s not a lot of rain in the area,” he said. “You also get the damage caused in Germany by the high electricity prices. We’re talking billions.”

Read More: Germany Has Three Months to Save Itself From a Winter Gas Crisis

Even seasoned veterans are shocked. Gunther Jaegers, managing director at Rhine stalwart Reederei Jaegers GmbH, said he fell off his chair earlier this month when he saw the cost of shipping, with one barge rate surging by 30% in a single day.

While Jaegers and other shippers might be able to charge more per ton of cargo, they’re limited in how much they can carry as the lower water means they have to take on smaller loads to sail safely. And there’s no relief in sight. If you look at the weather forecasts, “it’s like desert,” he said.

At the southern end of the Rhine Gorge — an area known for Riesling wines — terraced vineyards have turned brown, while in Cologne, a popular floating restaurant ran aground after waters retreated. A sandbank has emerged some 20 kilometers (12 miles) upstream from Kaub, the site of a difficult passage near the famed Lorelei cliffs.

The river’s depth at the town west of Frankfurt is forecast to drop to 40 centimeters (just under 16 inches) on Friday. At that level, barges are effectively unable to sail. The water is predicted to fall as low as 37 centimeters the following day, the German Federal Waterways and Shipping Administration said on Wednesday.

The Rhine, Europe’s most important river, plays a key role in helping transport more coal to German power plants to help offset the impact of Russia’s squeeze on gas supplies. But Chancellor Olaf Scholz’s administration is concerned shipping snarls could undermine plans to revive some mothballed facilities, according to people familiar with the situation.

France — normally a power exporter — can’t help ease the energy crunch because only about half the country’s nuclear reactors are available, with the rest off for maintenance. Norway is also gearing up to limit electricity exports as the country prioritizes refilling low reservoirs over power production.

The impact of climate change is mostly felt by people through changing patterns of water supply, either too little or too much. While Europe is suffering a historic drought, deadly floods this year have hit the US state of Kentucky, South Africa and Brazil. China has been hit by both.

As the climate crisis intensifies, it will only get worse. Europe’s main river systems are fed in part by Alpine glaciers. In the spring and summer, the runoff augments rainfall, but the ice flows are shrinking. The Alpine region has seen 2 degrees of warming since the second half of the 19th century, about double the global average, according to the European Environment Agency.

That sets off a doom loop, with barren rock absorbing the sun’s heat — rather than reflecting it as glaciers do — accelerating the process. Scientists expect Alpine ice cover to halve by 2050, with almost all glaciers disappearing by the end of this century.

Disturbances to the jet streams that blow east across the Atlantic are also making lengthy drought periods more likely, according to Germany’s DWD weather service. So-called blocking ridges lead to high-pressure zones remaining in place over western Europe for weeks and are typically accompanied by cloudless skies, according to the Institute of Meteorology at Free University of Berlin.

“We can adapt to a certain degree, but we’ll never catch up with climate change,” said Fred Hattermann, who studies hydroclimatic risks at the Potsdam Institute for Climate Impact Research. “Surprises will keep coming.”

Read More: Glaciers All Over the World Are Shrinking Fast — See for Yourself

Human habitation and overexploitation are also putting strains on river systems. Around 58 million people live in the Rhine area — one of the wellsprings of the Industrial Revolution — and its water is used for drinking, irrigation, manufacturing and power generation. Water scarcity in Europe’s river basins affects as much as a quarter of the region’s territory, the European Environment Agency says.

The conditions that have dried up Europe’s rivers are part of a long-running trend rather than a few bad months, according to Silje Eriksen Holmen, a hydrologist at Volue. Right now, the soil is so parched that most rain would be absorbed. Only when that’s been replenished will it start to flow into rivers, she said.

The Rhine is the lynchpin of Europe’s network of inland waterways. The river, which is connected to the Danube via canal, runs about 800 miles through Swiss and German industrial zones before emptying into the North Sea at the busy Rotterdam port in the Netherlands.

It’s all but irreplaceable for some companies. Germany’s rail network faces chronic congestion, while shifting to road isn’t straightforward either. More than 110 trucks are needed to carry the same load as an average barge, and Germany is suffering a shortage of as many as 80,000 truck drivers — made more severe as Ukrainians return home to fight Russia’s invasion.

At the very least, it means stockpiling more, and at worst, it could mean production shifting closer to seaports where there’s ample water for shipping and energy infrastructure like liquefied natural gas terminals.

“Rivers won’t become worthless for transport, but they are likely to become less reliable in the future,” said climate researcher Hattermann. “The ‘just in time’ model has come to an end. We need to build more buffers into our system.”

Rhine-related issues are starting to ripple through the region. A German refiner reported a run on heating oil and diesel. Switzerland is tapping fuel reserves and reported hydropower levels at the lowest since 2017. Ferries in the Netherlands have had to halt, affecting cars, trucks even and bicycle traffic in some areas.

The river is currently lower than it was at this time of year in 2018, when low-water during the autumn shaved some 0.4% off total German output, according to a study by the Kiel Institute for the World Economy. Nils Jannsen, one of the authors, says the estimate is a good start to gauge damages this year.

Predictions are for further declines in water levels, and “this will mean ‘game over’ for more and more barges,” said Joachim Hessler, managing director at shipping company Maintank GmbH.

Due to its worst-ever drought, France has imposed water restrictions throughout almost the entire country. More than 100 municipalities now rely on drinking water supplied by truck.

As the EU’s second-largest economy struggles with an energy crisis, the French nuclear regulator this week granted a temporary waiver for five nuclear plants to discharge hot water into rivers that may breach environmental standards. The move comes just as long-term prices set new records in France and Germany.

In Italy’s Po valley — home to about 30% of the country’s agriculture production — torrid heat and exceptionally dry conditions have hurt corn and sunflower production and forced rice farmers to cut plantings after the river fell to its lowest level in 70 years.

In its delta just south of Venice, the disruption to the natural flow is causing algae to decay and stealing the oxygen needed for clams and mussels to survive, according to farm association Coldiretti.

“We are very worried,” said Alessandro Faccioli, owner of a fishing trawler in the Veneto region. “We need urgent government intervention to save the lagoon’s environment,” he said, adding that so far this summer about 30% of clams in the area have been destroyed and at least 2,300 local fishermen and workers may lose their jobs.

A state of emergency was declared in five northern and central regions, and Italy has warned around a third of its agricultural production, one of the largest in the EU, is at risk from droughts and poor water infrastructure.

On the Danube, emergency dredging operations are under way in Bulgaria, Romania and Serbia, and ships are backed up waiting for channels to be cleared. The most critical spots are in the Zimnicea area along the Romanian-Bulgarian border and farther down river in Cernavoda, which affects shipping to Ukraine.

Aside from cargo, tourism is also feeling the impact. At the end of July, the 135-meter Adora cruise ship was en route to Passau, Germany from the Danube delta with more than 130 passengers. With water levels dropping, the tourists had to take a flight from Bucharest instead.

“We have to pray for rain,” said Rossen Ossenov, head of tourist services at Dunav Tours AD. “But that’s stupid. We need some predictability.”

Keeping the Danube navigable is crucial for energy supplies as barges bring coal to feed generators when output from hydro facilities is suffering, Serbia’s Infrastructure Minister Tomislav Momirovic said as he toured dredging at four sites along Serbia’s 590-mile section of the Danube.

It’s a race against time to maintain shipping for crude and oil products through the Danube’s bottlenecks to help contain soaring prices, he said, pledging that cleaning the river bottom will be done in a few weeks.

The bitter irony is that the waterways are a key part of the EU’s efforts to fight climate change. In its green transition plans, the European Commission targets a 25% increase in transport by inland waterways and short-distance sea shipping by 2030. The effort is backed by the 95.5 billion-euro Horizon Europe fund, which is supporting investment in shallow-water boats and engineering work to make shipping lanes more reliable.

In an effort to avoid a repeat of the 2018 disruption, Germany is pursuing measures to keep the Rhine open, including dredging and early-warning systems. The country is also considering more invasive options like reservoirs that could release water to offset reduced flows from glaciers.

In some cases, it’s a battle of inches. Between the German towns of St. Goar and Budenheim, the Rhine’s depth will be increased by 20 centimeters in a project that won’t be completed until the early 2030s. By that point, it could be too late for many businesses that depend on Europe’s rivers.

Ines Flores, who runs a company that offers boat tours in an area known as the French Grand Canyon, had to shut activity in one of the two beaches where she operates.