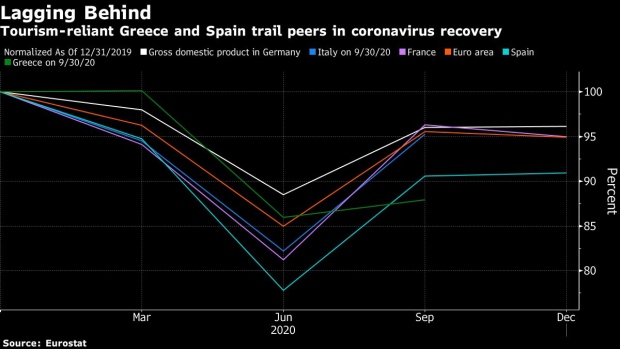 (Bloomberg) -- Europe’s consumer-facing companies face a critical choice for when the pandemic passes: should they exploit the expected pickup in business by raising prices?

There’s likely to be a rush to hairdressers, restaurants and tourism agencies reopening when virus restrictions end, fueled by pent-up demand and a hoard of cash accumulated after more than a year of forced saving.

Some economists reckon that will cause a jump in consumer prices as businesses from transport to leisure start charging more. Bond yields, a key measure of inflation risk, are rising globally. Figures last week showed U.S. retail sales surging and U.K. prices picking up -- both nations that are moving fast with vaccinations.

While euro zone data on Tuesday may even show the fastest inflation in almost a year, with 0.9% forecast by economists, prospects for a full recovery in pricing power are tempered by a far slower immunization rollout, and the legacy of millions of job losses during the worst peacetime recession in a century.

Follow the progress of vaccinations with Bloomberg’s Covid-19 Tracker

“The situation is weird -- we live with hope and anxiety at the same time,” said Christos Paschos, a hotelier on the Greek island of Amorgos, who cut room rates as much as 15% last year to cover expenses. “Right now, we are considering leaving prices at the same level as 2020. We need to see the demand first.”

Economists talk of a K-shaped recovery, where some sectors or countries pick up and others remain moribund. National fiscal aid has varied widely and plans for spending European Union recovery funds are still being submitted.

At the same time, some service providers say they will have little choice but to raise prices if they are to survive, with many consumer-facing companies operating on low profit margins and relying on volume.

“We noticed after the first lockdown that prices rose again,” said Harald Esser, president of the Central Association of German Hairdressers. “Many businesses are working with only half the space for clients.”

The argument that prices could rise much more than people expected after the pandemic hangs on the idea that governments and central banks have poured too much money into the system via furlough programs and bond purchases. It’s a debate already raging as cryptocurrencies and Reddit-fueled day trading surge.

A buildup of savings by consumers who managed to keep earning while having nothing to spend their cash on during lockdowns could be a manifestation of that if it materializes in sustained higher spending. Bloomberg Economics analysis by Maeva Cousin estimates 300 billion euros ($248 billion) more than normal poured into bank accounts last year.

Those with cash are already eager to spend at least some of it. Manabesh Chatterjee, who runs the PlanReisen travel agency in Frankfurt, says there’s no shortage of enquiries, even if potential customers aren’t yet ready to commit to booking.

“We’re seeing an enormous desire to travel,” he said. “Prices are rarely ever a topic.”

That chimes with the mood from holiday operator TUI AG, which said this month that prices charged for summer bookings are 20% higher than the same period in 2019. Chief Executive Officer Fritz Joussen said that reflected consumers with extra cash put aside during the pandemic.

Yet such savings are unevenly spread, and employment insecurity is high. The European Central Bank acknowledges that there will be occasional price spikes -- such as in January when some German pandemic tax breaks ended and energy prices were rising from low levels -- but says downward pressures will persist well after the crisis.

It forecasts average inflation of 1% this year, rising to just 1.4% in 2023, still well below its goal of just-under 2%. President Christine Lagarde said this month that “it’s going to be a while before we worry” about inflation being too high.

Jean Marc Banquet d’Orx, founder of France’s Longitude Hotels and treasurer of hotel and restaurant lobby UMIH, says the hospitality sector will largely have neither the desire nor the capacity to raise prices.

“The planes won’t arrive en masse again and we know that the flows from abroad will take time to return,” he said. Restaurants depend on local custom so “you must always remain in your market, respect the client, because we want them to come back.”