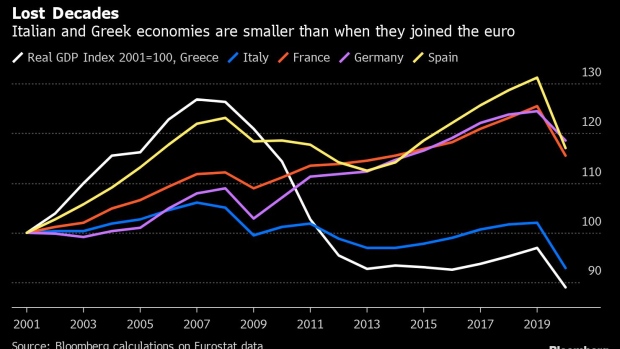 (Bloomberg) -- Europe’s southern countries can now claim the brightest collective outlook since the creation of the euro -- once the final hurdles of the coronavirus are overcome -- in a dramatic turnaround after two decades of malaise and crisis.

With nearly half of the European Union’s 800 billion-euro ($942 billion) recovery fund flowing their way, officials and business people from Athens to Madrid are gearing up for an unprecedented period of investment that might just succeed in altering their economic destinies.

“If you look at the sums of money that will be invested in countries like Spain, and Greece and Italy, these are extraordinary opportunities to change the path of longer-term growth,” Philipp Hildebrand, vice chair of BlackRock Inc., told Bloomberg Television earlier this month. “That’s the real historic opportunity that Europe now has.”

Both during the coronavirus crisis and the sovereign-debt turmoil of the past decade, the region’s southern countries have proven the weakest link in the euro’s delicate structure, endangering the whole project of monetary union.

The legacy is daunting. Nine of the region’s top 10 areas for youth unemployment are in southern Europe, ranging as high as 71% in Ceuta, an enclave of Spain. Greece is still scarred from a debt crisis that cost citizens a fifth of disposable income.

Then there’s also more recent damage to repair from the pandemic. Spain suffered a contraction of more than a 10th of output in 2020 alone. For Italy, cumulative damage from the coronavirus and years of government deadlock means real gross domestic product is lower than it was when it joined the euro.

That danger isn’t yet past, with variants of the virus threatening a new wave of infections over the summer that will hit tourism-dependent nations most. The Greek island of Mykonos is one example, forced by the government to impose a nighttime curfew and a complete ban on music in restaurants, bars and shops.

Mykonos Mayor Kostas Koukas has attacked the latest restrictions, but is optimistic about the future. Spending slated for green and energy projects there augur the possibility that many islands can be connected to the mainland’s grid for the first time.

“The importance for growth and society of ensuring uninterrupted electricity supply and not being dependent from oil is self-evident,” said Koukas. “Our islands will turn the page.”

Greece will receive 30.5 billion euros of EU money, equivalent to almost one-fifth of the economy.

Italy will get 192 billion euros in grants and loans, the largest payout of all. Topped up by national spending, around 40% of the money will target its poorer southern regions. Prime Minister Mario Draghi’s administration estimates economic output will increase by 3.6% by 2026.

“Europe needs Italy to get back up to speed to succeed, due to the size of its economy, and Italy needs its south to accelerate to succeed,” said Eugenio Mazzarella, a professor at Federico II University in Naples. “It’s all inextricably tied together in a historic wager.”

Spain will receive around 140 billion euros in funds, around half of which are grants that don’t need to be repaid. With such eyewatering sums in mind, the 23 members of the National Association of Independent Builders are preparing to bid to work on contracts that focus on sustainable transportation, compensating for years of underinvestment.

“We need new infrastructure and to maintain existing infrastructure,” said Concha Santos, president of the group. “This package is key to member states’ recovery.”

While Moody’s Investors Service warns that Italy, Spain, Greece and Portugal will probably struggle to fully disburse EU grants and cheap loans, it reckons public investment in those countries will still double in the next five years compared to the previous half decade.

The ratings company projects the EU package will boost economic expansion in southern Europe by around 0.5 percentage points annually on average between 2021 and 2027, a boon that could reach 0.7 percentage points if governments manage to spend it all.

The benefit might be even greater if countries deliver on the pledges to achieve sweeping pro-growth and administrative reforms, which are tied to disbursements of the EU funds. They range from fixes to Spain’s troubled labor market to streamlining Italy’s creaking bureaucracy.

The danger is that some of the money is wasted -- becoming another squandered moment for a region beset by challenges from huge public debts to poor population growth.

“This is a once-in-a-generation opportunity because of the amounts of money that are concerned, and because it’s an integrated package of not just money but also reforms,” said Sarah Carlson, a Moody’s analyst. “The question that we have is, will they make the most of that?”

In any case, even the creation of the recovery fund brings with it hope that one day it might become a permanent cushion against growth shocks, or something even more ambitious.

“This could be a first step toward a joint fiscal capacity, and ultimately a fiscal union,” said Alexander Kriwoluzky, an economist at think tank DIW Berlin. “That could be a game changer for future generations.”