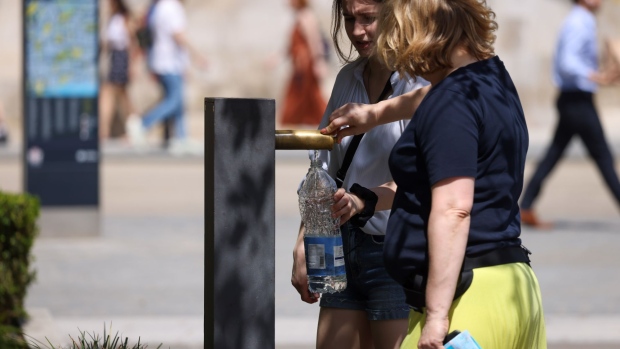 Pedestrians fill a bottle with water in the City of London, UK, on Friday, June 17, 2022. UK temperatures may hit 34 degrees Celsius (93.2 degrees Fahrenheit) this week, a once-rare level that’s becoming more common on the back of global warming. , Bloomberg

(Bloomberg) -- The extreme heat in Spain, the UK and France this summer was made worse by changes in the jet stream, the strong westerly winds that blow above the planet’s surface, highlighting another way in which global warming could be altering our climate.

Western Europe is a heat wave hotspot, with extreme high-temperature events rising three to four times faster than other northern latitudes over the past 42 years, according to a paper published in Nature Communications by researchers from the Potsdam Institute for Climate Impact Research. The weather was linked for the first time to the splitting of the jet stream in the Northern Hemisphere, which has become more common.

“Double jets can be triggered by a variety of reasons including chaotic variability in the atmosphere,” said co-author Dim Coumou. “Increasing temperature difference between land and ocean favors the persistence of double jet states in summer.”

The jet streams — one in each hemisphere — are fast-moving belts of wind that take wavy paths at a height of 5 to 10 kilometers (3 to 6 miles) above Earth. They are generated when cold air from the poles clashes against warmer air from the tropics, and are responsible for weather phenomena such as storms, rain and drought.

Splits in the jet stream have become longer lasting, the researchers found. The so-called “double jet states” explain almost all of the increasing heat waves in Western Europe, and around 30% across the whole of the continent. Scientists examined daily climate data for July and August over 42 years.

The number of double jet events per year hasn’t changed much, according to the research. But these events are becoming longer with the increased persistence acting on top of the warming of the planet caused by human emission of greenhouse gases.

Still, scientists haven’t agreed on how exactly climate change is influencing the jet stream. The study’s authors said a possible explanation is that high latitudes such as Siberia, Northern Canada and Alaska are warming more than twice as fast as the rest of the world. More research is needed to understand these relationships, Coumou said.

“Climate models tend to underestimate extreme weather risks,” he said. “Projections of extreme heat under continued greenhouse gas emissions might be too conservative.”