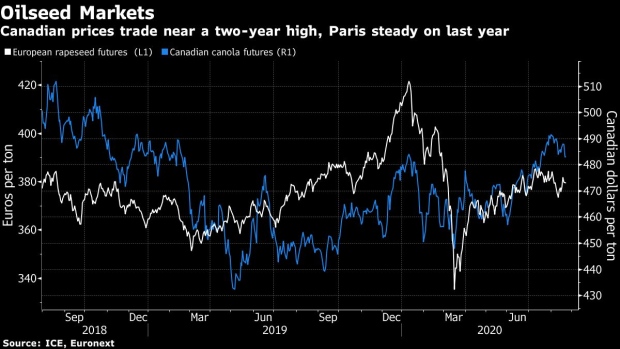 A Claas KGaA Lexion combine harvester cuts through a field of rapeseed during a harvest in South Woodham Ferrers, U.K., on Thursday, July 19, 2018. Major crops such as rapeseed and wheat are already expected to be smaller due to dry conditions in key producing countries. Photographer: Chris Ratcliffe/Bloomberg , Bloomberg

(Bloomberg) -- Another paltry rapeseed harvest in Europe is tightening global supplies even as crops swell abroad.

Dry spells drove down yields this season, and farmers have battled more insects since a key crop chemical was banned by the European Union. That means EU output of the oilseed, used in biofuel and cooking oil, likely sank to a 14-year low, the U.S. Department of Agriculture estimates.

The shortfall is heralding another year of large imports and comes as the EU’s usual supplier, Ukraine, also suffered from bad weather. Hefty hauls in top exporters Canada and Australia won’t be enough to offset the loss, and global stockpiles could fall to half of what they were two years ago.

“It’s the new normal for the European markets to be in a deficit of rapeseed,” Peter Collier, an analyst at CRM AgriCommodities, said by phone.

Biodiesel demand and shrinking crops following the neonicotinoids limits have buoyed European imports in recent years, making the EU the world’s biggest buyer. The bloc’s consumption outstrips domestic supply, boosting reliance on supply from Ukraine and further afield. With the Black Sea nation’s harvest down this year, other shippers are likely to grab a bigger share.

Canada is poised for one of its biggest ever harvests of canola, a similar crop. The nation has already been selling increasing amounts to the European biofuel industry as traders look for markets to offset the trade spat that cut shipments to China, its main customer. Exports to Belgium, Portugal, France, Germany and Greece nearly tripled between August 2019 and the end of June, Canadian Grain Commission data show.

Some of those sales may be indirectly ending up in China, where rapeseed oil prices have surged on supply worries. Canadian shippers sending the raw commodity to the EU to be crushed, before the oil is exported, effectively skirts the trade tensions, said Alex Cook, an analyst at the U.K.’s Agriculture and Horticulture Development Board.

Australia’s crop has also benefited from autumn rains and its supply will be needed due to EU crop restrictions, according to Cheryl Kalisch Gordon, senior grains and oilseeds analyst at Rabobank. The bloc’s rules prevent Canadian canola, which is genetically modified, from use in cooking. About 80% of Australia’s crop is non-GM, and the nation could sell the most to Europe in three seasons, she said.

While European growers are looking for new ways to combat pests, the short-term outlook is downbeat. British farmer Joseph Hodges has gradually swapped rapeseed acreage for peas and pulses as consistently poor harvests fail to make the crop worthwhile. It now occupies just 30% of the space it did four years ago, a familiar pattern across Europe.

“The plantings are down massively, and I’ll suspect they’ll be down again next year as well,” he said. “It’s become such a high-risk crop for us as a grower.”