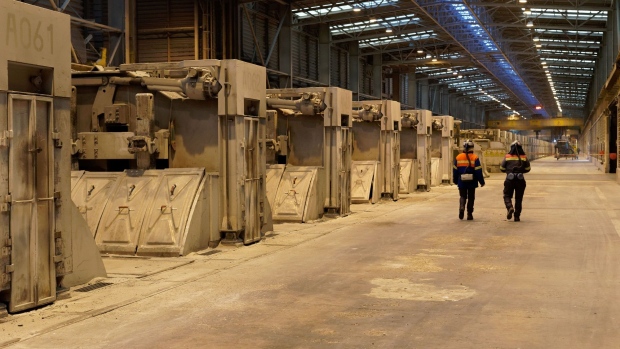 LOON-PLAGE, FRANCE - JANUARY 13: View of one of the two halls of electrolysis potline in the "Aluminium Dunkerque" plant of American Industrial Partner group (AIP) on January 13, 2022 in Loon-Plage, near Dunkirk, France. Faced with the rising cost of electricity, representing nearly 30% of its overall operating cost, the management of Aluminum Dunkirk has decided to shut down some of its electrolysis cells. The plant uses the equivalent of the city of Marseille in electricity per year. (Photo by Sylvain Lefevre/Getty Images) , Photographer: Sylvain Lefevre/Getty Images

(Bloomberg) -- Europe’s largest aluminum smelter will reduce production by 22%, the latest in a wave of cutbacks due to soaring power prices that executives warn are threatening the industry’s very existence.

Aluminium Dunkerque Industries France will begin shutting down a portion of its production pots next Monday and complete the process by Oct. 1, Chief Executive Officer Guillaume de Goys said in an interview.

The smelter, which produced 290,000 tons of aluminum last year, is in a better position than some competitors because it buys the majority of its power at fixed prices under a French nuclear power scheme known as ARENH, but is exposed to market prices for the remainder.

European aluminum production has already dropped to the lowest levels since the 1970s as the power-intensive industry grapples with skyrocketing energy costs. Norsk Hydro ASA is preparing to close a smelter in Slovakia by the end of the month.

“The primary aluminum industry in Europe has already paid a large tribute to this energy crisis. If we reduce further, we will be in a position where the primary industry will have completely disappeared in Europe,” de Goys said. “In terms of sovereignty, it would be bad for Europe.”

The Dunkerque smelter, which is owned by U.S. private equity group American Industrial Partners after a battle for control with its previous owner, Sanjeev Gupta, reduced production by 15% last winter but has been producing at full capacity since June.

It’s not clear when it will be economical to resume the production. “Currently it’s way too high to restart production at full capacity,” de Goys said. “The breakeven point currently is around 250 euro per MWh.” French baseload power futures are trading above 300 euros until mid-2024.

The company doesn’t expect the latest cuts will have significant implications for employment at the plant, he said.

“We will ask our employees to take vacations, do training and redeployment, and will look at furlough schemes as a last resort.”