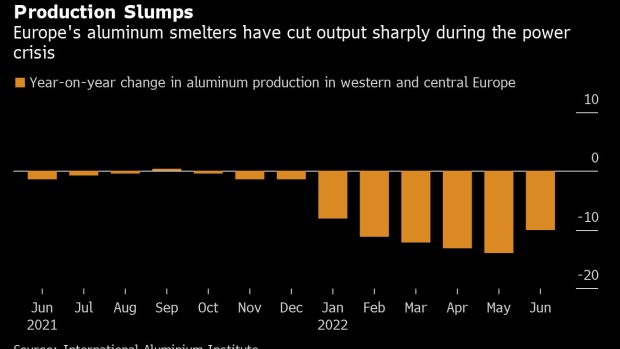 The Hamburg-based company is looking to switch to alternatives like fuel oil, but is bracing for a potential restriction in gas supply that could impact its sprawling industrial operations in the country.

“I’m very confident Aurubis will not be the first to be shut down,” Harings told investors on Friday. “There are others that are more exposed than we are.” Any stoppage would be “very controlled,” he said.

The comments show how some of Europe’s biggest energy users are striving to adapt amid warnings that sky-high prices for gas and power could persist for years. Aurubis has hedged about two-thirds of its electricity requirements for this year, but in future will look to pass on the cost increases more fully to its customers, Harings said.

Copper producers have so far been less exposed to the crisis than rival smelters of zinc and aluminum, as they have a lower pound-for-pound energy consumption. But Aurubis’s plants still consume significant amounts of gas in the production of semi-finished products like copper wire-rod and billets.

Constellium SE -- a major supplier of aluminum parts used in car-making and construction -- last month told investors it’s taking a similar approach to that outlined by Harings, and will look to add energy-surcharge clauses in future supply deals with customers. Those measures could help keep industrial metals operations running, but it could also bake in higher costs for manufacturers and consumers across the continent for years to come.

Aurubis is also “in intensive discussions” with politicians and regulators about creating a capped energy price for major industrial users in Germany, similar to a mechanism in France, Harings said. That price cap has helped insulate France’s largest aluminum smelter from the surge in power prices, with Aluminium Dunkerque Industries France buying 80% of its energy at a fixed rate.

Yet with consumers being urged to conserve energy across the continent, the metals industry could come under growing pressure to reduce its massive footprint. Bloomberg calculations suggest the spot-market value of the power typically needed to produce one ton of aluminum in France is about $8,000, while aluminum prices are trading at less than $2,500 a ton on the London Metal Exchange.

An EU plan to cut gas usage by 15% will involve walking a tightrope between preserving energy supplies for residential users while mitigating the risk of lasting damage to vital industrial infrastructure. The aluminum and zinc industries aren’t major direct users of gas, but the vast amounts of power that smelters consume has left them at the sharp end of Europe’s crisis.

Europe has lost about half of its zinc and aluminum smelting capacity within the past year, and a further surge in power prices could knock more plants offline over winter, the region’s biggest metal producers warned last month.