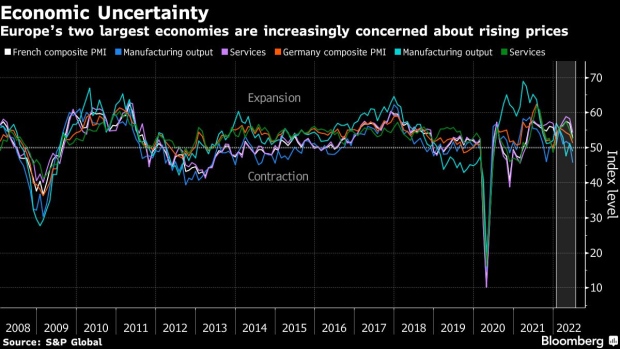 An employee prepares pneumatic pipework on the tractor break system assembly line inside the Fendt GmbH agricultural machinery factory in Marktoberdorf, Germany, on Wednesday, Nov. 28, 2018. Healthy demand in the manufacturing sector helped boost the number of job vacancies in Germany by 23,000 to a record 1.24 million in the third quarter, according to the latest survey by the IAB Institute for Employment Research. Photographer: Krisztian Bocsi/Bloomberg , Bloomberg

With the initial boost from a loosening of Covid-19 restrictions in Germany and France wearing off, gauges of activity fell more than expected in June. Manufacturing output contracted in both countries, according to surveys by S&P Global, as did new orders.

Service providers also suffered, with activity cooling after the boost from the phasing out of coronavirus lockdowns faded.

“Germany’s economy has lost virtually all the momentum gained from the easing of virus-related restrictions,” S&P Global economist Phil Smith said Thursday in a release. “But perhaps the biggest cause for concern is a broad-based decline in demand.”

The reports signaled that, for now, economic activity is still being supported to some extent by workloads built-up earlier in the year. But the range of challenges confronting the world economy has led to worries that a recession is on the horizon.

Those fears are being fanned by rising interest rates, with the European Central Bank set to hike borrowing costs for the first time in more than a decade in July.