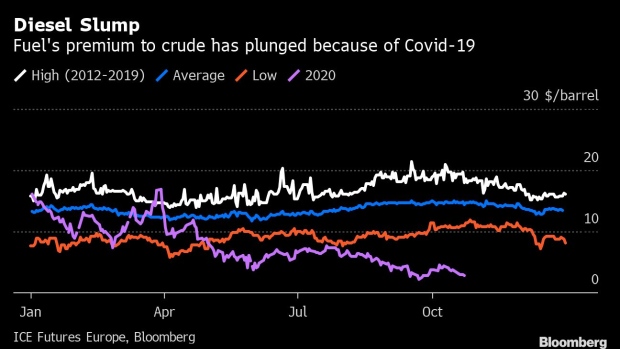 (Bloomberg) -- Europe may still be mired in a deep economic slump, but the region’s truck drivers are hauling bumper volumes of goods across the continent as online shopping surges, offering a rare boost to oil demand.

Girteka Logistics, owner of Europe’s largest fleet of trucks, said it will deliver about 800,000 full loads this year, up about 10% on 2019. The company has more than 7,000 vehicles, moving everything from ice cream to electronics.

The freight surge is being driven by a boom in e-commerce during the coronavirus outbreak, said Kristian Kaas Mortensen, director of strategic partnerships at Girteka. While individuals have had their movement limited by virus restrictions, the Vilnius, Lithuania-based firm has been hauling bumper volumes of consumer goods, food and pharmaceuticals, often for home consumption.

“The money that is not going to Spain on vacation, or on a business trip, is going to another spending,” said Mortensen. “That happens to be a spending that benefits the transport patterns we are operating in.”

Trucking accounted for 39% of Europe’s diesel demand last year, according to data from the International Energy Agency, an adviser to oil-consuming nations. A glut of the fuel has emerged this year because refineries -- struggling to cope with a collapse of the aviation industry -- are diverting jet fuel into the production of diesel. That has swelled supplies at a time when other sources of demand have been lackluster.

Diesel is trading at about $2.70 a barrel more than Brent crude in Europe, according to Fair Value data compiled by Bloomberg. Last year it was at an average premium of about $15. To be sure, extra trucking demand may not be sufficient to lift the fuel, given that there is still an oversupply that’s led to ships storing a surplus of the petroleum product for months at a time in the North Sea.

In the depths of the pandemic, the vast majority of Girteka’s fleet kept moving, delivering food and pharmaceutical goods, for which demand didn’t really drop during March and April, Mortensen said.

Government traffic data in the U.K. backs the view that trucking activity has recovered. Over the last two weeks, traffic of heavy goods vehicles in Britain ran on average at 109% of the pre-covid level, while passenger-cars was only 87% of the level before the pandemic struck, according to data from the U.K. Department for Transport.

Since the end of September, trucking activity in Germany has been 0.9% higher than it was a year ago, according to the Federal Statistical Office, which tracks toll data to measure the mileage of large trucks on its highways.

Europe’s economy began contracting in the first quarter of this year and will keep doing so until the three months ended March, according to official data and economists’ forecasts compiled by Bloomberg.

“Our company is, in many ways, essential infrastructure,” Mortensen said. “We are driving food to supermarkets and healthcare products to pharmacies and hospitals. Supermarkets were open, pharmacies, healthcare and so on, which is where most of the things we are driving with end up. So basically all trucks kept moving all the time.”