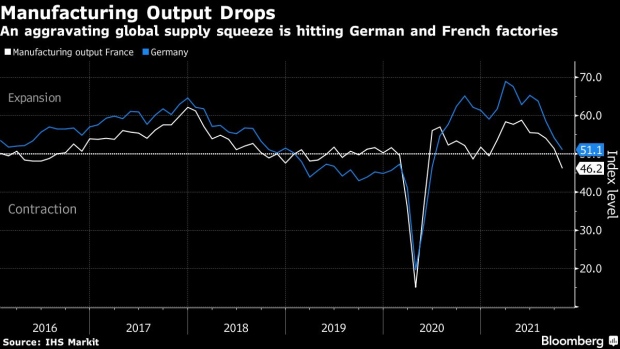 Gauges for factory orders in both countries deteriorated in October, with some goods producers mentioning that “severe delays” on inputs were responsible for contracts being canceled or postponed. Inflation pressures grew amid the bottlenecks, according to IHS Markit surveys.

“While until recently, the effects of inputs shortages have been most apparent on prices, we’re now seeing them have a noticeable impact on production levels and order book,” said Joe Hayes, a senior economist at the London-based firm.

Business activity in Germany, Europe’s largest economy, fell to an eight-month low in October. France held up somewhat better, benefiting from a boost to tourism services on the back of looser travel restrictions.

The report comes less than a week before European Central Bank officials gather to assess the state of the euro-area economy. So far, they’ve insisted that supply shortages will delay rather than derail the recovery, and that price pressures will soon moderate.

Businesses in Germany and France trust they’re right. Expectations for future output strengthened in both countries and employment increased.