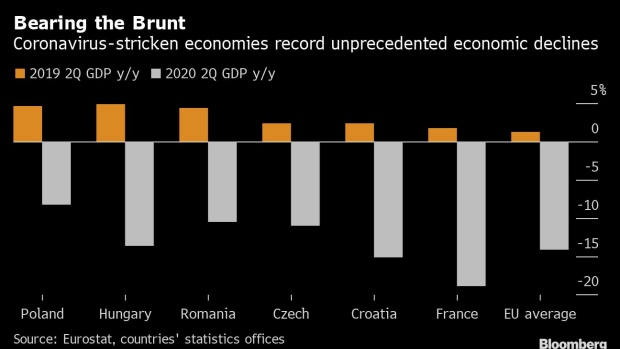 (Bloomberg) -- When more than 2,000 people gathered on Prague’s medieval Charles Bridge in a “farewell party” for Covid-19 in June, it was to celebrate one of Europe’s most effective efforts to halt the virus’s spread.

The Czech government, which had acted faster and more strictly than almost any other in the European Union, lifted rules on social distancing and mandatory masks wearing. Two months later, it’s trying to contain an explosion of new cases that has eclipsed numbers seen earlier this year when the virus raged across Europe.

In an unfortunately growing trend, eastern EU states that acted more decisively than peers like France and Spain are battling a resurgence that took root when restrictions fell. Governments loath to shut down schools and businesses after lockdowns hammered their economies are facing pressure at home, while their neighbors are erecting new limits on travel.

“In June, we all felt like the virus was gone,” Czech Prime Minister Andrej Babis said Sunday. “Unfortunately, we were wrong.”

With cases rising again worldwide, in the eastern EU, authorities from Slovenia and Croatia to Romania have taken a lax approach toward imposing fines for mask-wearing violations.

In the latter, where new cases have exceeded 1,000 a day for the past month, students protested against reopening schools and called for the education minister to resign, while several thousand people protested against face coverings in Zagreb earlier this month.

In Hungary, new infections have doubled each week in September to eclipse those seen at the start of the pandemic. Eight people died on Wednesday, matching the highest daily count since May 29.

“Compared with the rest of Europe, the pandemic is raging in Hungary as a proportion of population,” Ferenc Jakab, head of the virology research group at the University of Pecs, said at an online conference Tuesday. “That’s the dark truth.”

Still, Prime Minister Viktor Orban is resisting measures that will shut down parts of the economy after the country suffered one of the worst downturns in the region. His Romanian counterpart, Ludovic Orban (who’s not related), also announced it was up to citizens to stay safe.

“I don’t think new restrictions should be imposed,” the Romanian leader said. “Quite the contrary, we need a permanent dialogue and to help people understand that they’re the ones that have to protect themselves.”

Babis also rejects shutting down the economy again, even after the Czechs’ former federation partners, Slovakia, put it on its red list for accepting travelers.

The Czech premier overrode government epidemiologists’ recommendations last month for mandatory mask wearing in public. He also attacked the World Health Organization after it expressed concern over the worsening situation and criticized his government for considering cutting down on tracing cases.

Along with other leaders who just weeks ago declared the virus defeated, he has since ordered people to wear masks and be more vigilant.

“I want to ask all of you, please, to persuade those, who aren’t wearing them, to start wearing them,” he said Sunday. “We’re in the same boat. We have to get through this together.”