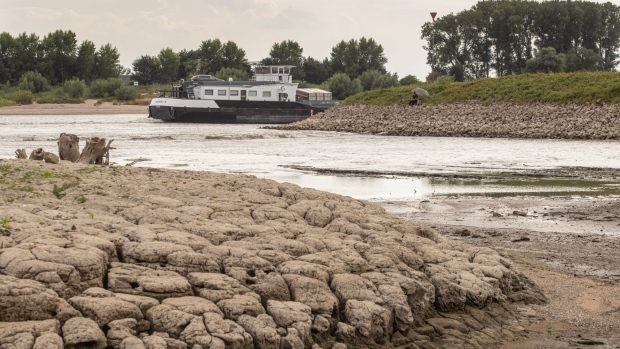 An exposed riverbed due to low waters caused by drought on the Rhine River in Lobith, Netherlands, on July 30. Photographer: Peter Boer/Bloomberg , Bloomberg

(Bloomberg) -- Water levels on the Rhine River are set to fall perilously close to the point at which it would effectively close, putting the trade of huge quantities of goods at risk as the continent seeks to stave off an economic crisis.

The river at Kaub, Germany -- a key waypoint for the shipment of commodities -- is set to drop to 47 centimeters (18.5 inches) by the weekend. That would take it to within 7 centimeters of being all but impassable.

Europe is already facing its worst energy-supply crunch in decades as Russia chokes off natural gas, stoking inflation. Now climate change is adding to the continent’s woes. An impassable river could halt the flow of everything from fuel to chemicals as governments try to prevent the energy crisis from tipping the region into recession.

Snaking roughly 800 miles (1,288-kilometers) from Switzerland to the North Sea, the Rhine is vital for deliveries and exports of heating oil, gasoline, coal and other commodities.

“With the Rhine transport disrupted and alternatives such as rail and road looking increasingly expensive, it will be difficult for Germany and Switzerland to build gasoil/diesel stocks before temperatures cool,” said Josh Folds, a European oil analyst at consultants Facts Global Energy. “This is especially true given the situation with Russian gasoil/diesel imports.”

On Tuesday, the water level at Kaub fell to its lowest since 2018, a year that saw widespread disruption for key industrial users. It’s now a little over 60 centimeters and is forecast to drop to 47 centimeters on Saturday, according to the German Federal Waterways and Shipping Administration.

A representative for Germany’s Federal Institute of Hydrology said in July that it becomes uneconomical for barges carrying commodities to sail past Kaub when the measured level drops to 40 centimeters or below.

The low levels are already disrupting trade flows, limiting how much fuel barges can carry into inland Europe. Switzerland, which uses the Rhine to import oil-based fuel, is releasing stock from its strategic reserves.

Parts of inland Europe’s fuel supply are also being hampered by refinery outages in Germany, the Czech Republic and Austria. The latter, along with Hungary, is also releasing fuel from its inventories.

The low water is impacting the shipment downriver of some components used to make gasoline for blending, according to Joseph McDonnell, an oil products analyst at Energy Aspects. The flow of petrochemical feedstocks, like naphtha, from the Amsterdam-Rotterdam-Antwerp hub to inland facilities, is also being affected, he said.