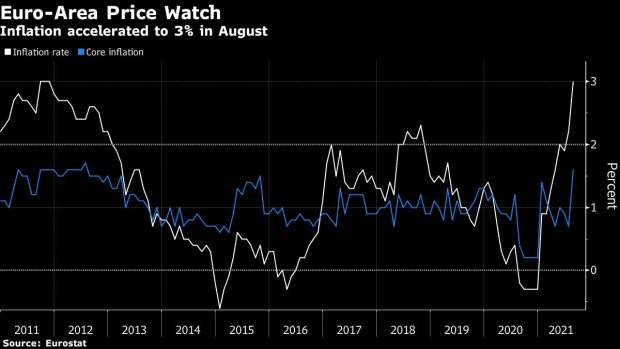 The euro-area economy’s rebound and a dramatic inflation surge has reignited the sparring among European Central Bank policy makers about when to shift the institution away from its crisis mode.

While euro-area central bankers were mostly united behind the measures taken to guide the economy through the Covid-19 recession, the return toward normality is fraying that consensus. Two hawkish Governing Council members, Austria’s Robert Holzmann and Klaas Knot of the Netherlands, kicked off a public exchange of views this week when they said that the inflation outlook now warrants stepping back stimulus.

The comments in separate interviews with Bloomberg coincided with data showing inflation in the euro region jumped to 3%, well above the ECB’s goal. While most view the current spike as transitory, some worry that that letting ultra-loose policy run for too long risks letting the situation getting out of control.

The ECB has taken a more cautious approach on withdrawing support than other global central banks such as the U.S. Federal Reserve, which may wind down stimulus later in 2021.

But with the next policy discussion a week away, officials are staking out their diverging positions, reviving the heated debates that characterized much of the last decade of unconventional measures. More cautious Governing Council members will try to keep the focus on the uneven nature of the recovery and the ongoing risks from the delta variant.

“The hawks have been very silent in the past year and a half as they have supported the ECB policy response,” said Piet Christiansen, chief strategist at Danske Bank. “Now as ‘normality’ is coming back, they’re seizing the opportunity to make their voices heard again.”

Christiansen said next week’s meeting will likely end in a compromise. The hawks will win a decision to slow down the pace of emergency asset purchases, which were accelerated earlier this year to aid the recovery, with a “bigger battle” over the future of the pandemic program delayed until December.

In their comments, both Holzmann and Knot backed a slowdown next week.

That was the starting point in a tit-for-tat assessment of the economy. Greek Governor Yannis Stournaras responded less than a day later, telling Bloomberg that the ECB must be cautious in assessing the course of inflation. He argued wage developments are not yet following the same path as recent price spikes, a view echoed later in the day by Slovenia’s Bostjan Vasle.

“We have to watch the risks to the outlook for prices. In my view, upside risks predominate,” the German central bank chief said, adding that stimulus should be scaled back gradually to avoid a sudden stop when the crisis program comes to an end.

In the debate playing out on monetary policy, some also fear that by continuing support for too long, they risk sending a misleading signal to governments about their commitment to keep borrowing costs low at all costs. That would mean the burden of supporting the economy once again falls to heavily central bankers, echoing the imbalanced situation after the euro-area debt crisis.

The back and forth playing out now are just a precursor to a deeper discussion. Talks about terminating the program -- currently due to end in March -- and eventually relying on more traditional forms of stimulus will be even more intense.

Officials have praised Lagarde for her more consensus-oriented leadership style, yet most of her term took place during the crisis, when uniting behind support measures was possibly easier.

“Governing Council members all appear to have different definitions of when the ‘crisis phase’ could be deemed to have ended,” BNP Paribas’ Paul Hollingsworth and Spyros Andreopoulos wrote in a note to clients. “Where we see the biggest risk is that by December or January the Governing Council still hasn’t come to an agreement.”